Whatever could it be!? 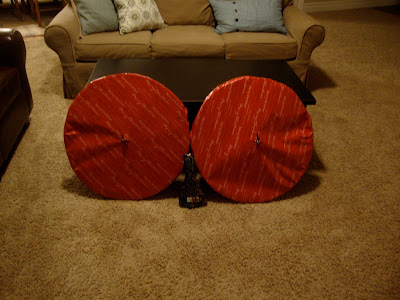 No, I'm not talking about my wife's "Fall Moab Pillows" in the background.

It's nearly 3 lbs off of my current setup by the time everything is said and done, that's what: 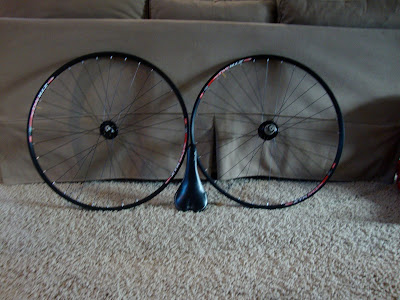 Santa also got me a new set of uber-light tires (which may or may not actually hold air), a new set of uber-light rotors (which may or may not actually stop me) and converted my bike to a 1x9 setup (he's a pretty good mechanic). I reserve the right to throw granny LaBerta back on from time to time for courses like Park City Point to Point and Solitude.

Please don't sneeze when I pass you (which is bound to happen quite often with my new setup). I'm afraid you might break my new wheels.

I'm hoping that the weight savings on my bike will offset the fact that I haven't actually ridden a bike in about 3 weeks, and I've been doing nothing but eating pie, cookies and ice cream for the past 3 days. Playing in the snow and with the family has been fun though.
Posted by Aaron at 9:38 AM 7 comments:

The Happiest Place on Earth! Yeah!

Has anyone seen this list floating around? It's the 10 "Happiest" states:

Well of course we're the happiest! With all of the Prozac we take, how could we not be!?

The Flawed Study and Hypothesis

The study was entitled, "Happiest States are Wealthy and Tolerant." The website that published this study is called "livescience.com", so one would think it would be safe to assume that the wealthy + tolerant = happy hypothesis is based on rock-solid incontrovertible scientific evidence.

However, the fact that Utah is neither extraordinarily wealthy (14th out of 50) or tolerant (unless tolerance really just means "so homogeneous that tolerance is really easy", i.e., you are tolerant toward people who are just like you, which becomes easy when the majority shares your political and religious beliefs) made me question the wealth + tolerant = happy hypothesis.

Upon identifying the flaws in the wealth + tolerant = happy hypothesis, I set out to find a new explanation for what makes a state happy. After minutes of extensive study and analysis, I've come up with a new hypothesis. The evidence supporting my hypothesis is so strong that it completely debunks the wealth+tolerance=happiness myth. My hypothesis is as simple as it is true:

Of the top 10 on the list, almost every single one has great mountain biking. Check it out: Utah, Hawaii, Wyoming, Colorado, Minnesota (which I hear has one of the best race series around), Washington, Maryland (which I hear has excellent east-coast singletrack), California, and Arizona. Mass is the only one I'm not sure of. If you keep going down the entire list, the evidence is equally strong, with Idaho, Montana, New Hampshire, Vermont, New Mexico, Oregon, and Alaska all making the top 20.

On the other hand, take a look at the most depressed/unhappy states:

Hey, I'm planning a mountain biking trip that hits every one of these bottom-ten states. Anyone want to come? Didn't think so.

Now that I've definitively established that mountain biking makes happy states, let's take another look at my assertion that "tolerance" really means "homogeneous" in this study. If that's the case, then it's no wonder that Utah County is called "Happy Valley." In fact, between its homogeneity and incredible mountain biking, I may very well live in the happiest place on earth! But if you're not just like me, please ride somewhere else. Thanks.

If you are just like me, please meet today at the Shooting Range (above the Orem Cemetary) at 1pm for what may be the last snowless ride of the season. We'll be riding "RAPR" (Ride Around Provo River), which basically looks like this.
Posted by Aaron at 10:45 AM 7 comments: