Alright, so here's my annual tour post containing a few random thoughts. While watching Lance get dropped yesterday morning at the bottom of the first significant climb, I got to thinking. Is Lance really that slow? I mean, can it be that the 7-time champ can't even keep up with the leaders, even before they've really start racing? Doubtful. My guess is that he's saving his legs for for a stage win. And why not? He deserves to go out in a blaze of glory, right?
Bull crap.
If he goes for a stage win, I'm pretty pissed if I'm Levi. How many times have Lance's teammates (including Levi) turned themselves inside out for, gotten water for, doped for (hopefully not Levi), etc. for Lance. Lance finally has the chance to return the favor and what does he do? Knowing that he stands no chance of a stage win on a mountain-top finish, he soft-pedals up Port de Pailheres so he can save himself for his 26th career stage win. At least that's what it looked like to me.
Lance has obviously been taking some heat lately. Hating Lance is not even counter-culture anymore - it's mainstream. For me, there's one thing he can do at this point to salvage any shred of dignity he has left. I want to see him lead Levi over every climb. I want to see him get water for Levi. I want to see him give Levi his bike when Levi punctures (alright, so Levi probably couldn't reach the pedals, but you know what I mean). I want to hear Levi thank Lance for getting him on the podium (and considering that Levi can put 2-3 minutes on just about everyone above him in the GC during the TT, I don't see this as being a huge stretch... especially if he can get some help). What I'd really like is to see for Lance to "pull a Jens Voigt" and pedal so hard up the Tourmalet on stage 17 that he tastes blood, and when he finally has to pull off to let Levi go, it's all he can do to not just fall off his Trek, curl up in a ball and cry. I'd especially like to see that.
If he does that, I may actually look back on Lance with some respect.
But more likely, he'll burn all of his matches trying for that stage win and confirm himself as the world's biggest megalomaniac (as if anyone needed confirmation of that). In which case, I can see Levi finally snapping. Doing something crazy like filling some medical bags with dark red Kool-Aid, writing "Mellow Johnny" on them, snapping a few pictures, and sending the evidence to the feds. Like how Milton from Office Space burned down the building after he wasn't allowed to listen to his music at a reasonable level and had his stapler confiscated. Poor Levi. No respect. It would be tough to blame him for burning down the building.
Or who knows, maybe Lance really is that slow. I think we'll find out for sure either tomorrow or Tuesday. In the meantime, we may as well enjoy the best tour I've seen in a while. Can I get an Amen?
Posted by Aaron at 11:16 PM 4 comments:

I thought our winter dawn patrols were early until I let Brandon set the start time on Saturday morning's ride. I think he has me sold on the early starts though - you can get a lot of riding in before lunch if you start riding by 5:30am.

Diamond Fork was the destination. Each time I head down there, I'm anxious to get back. Here is Brandon, flexing his triceps for the camera: 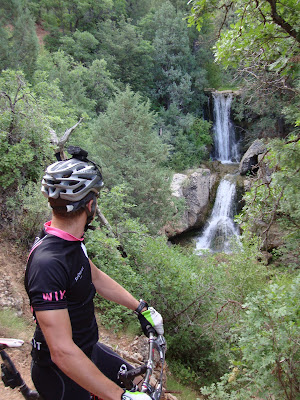 Miles has a nice little video here, where you can see the proper way to approach 5th water's "hike-a-bike" section.

I headed out for two 2nd Water to 5th Water laps - the first using the pavement, and the second using Strawberry Ridge to connect the two. If you haven't gone up to Strawberry ridge, I highly recommend it so that you can partake of the goodness offered by upper 5th Water (which you'll miss if you use Center trail to connect): 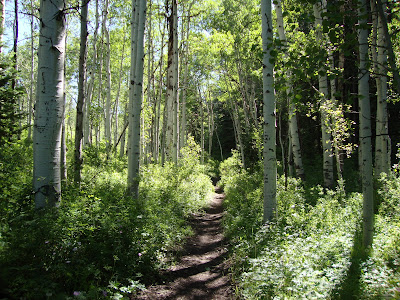 The downside to doing two laps in Diamond Fork on a Saturday morning is that by the time you pass the hot pots for the second time, it's busier than a skin track in Scottie's Bowl on a powder day.
The upside to doing two laps in Diamond Fork is that on your first lap, you can play a game where you predict which hikers you'll see swimming naked in the river during your second lap. On Saturday morning, I went 1 for 1. She was not the least bit concerned that a bunch of 10-13 year old boys were about to see their first real-live lady in her birthday suit. I guess she figures that if you're going to take your kids up to the hot pots, you know the risks. Or at least you should.

On that note, I took my kids up to the hot pots the following evening...
It's a great hike: 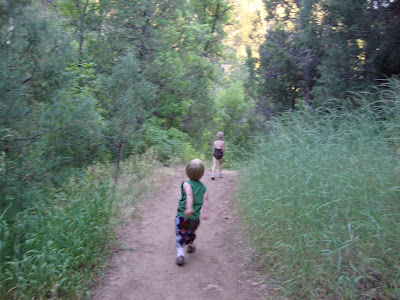 With a great destination. 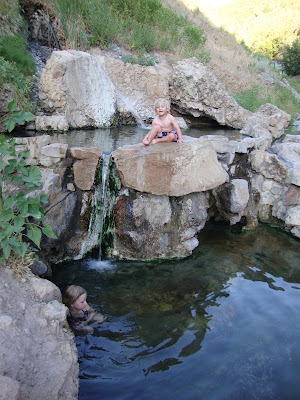