Lately, I've been trying to squeeze in a little more skate skiing before it is too late. A couple of days ago (before it snowed this weekend), I decided to try and get an early morning session in over at the Wasatch Mountain State Park, which is just up the road from our temporary residence in Midway. I arrived and was disappointed to find that most of the "groomed" track looked like this: I was pretty bummed that the ski season was apparently over, not to mention the time time I wasted gathering my stuff, waxing my skis, etc., only have to turn around and head into work. Then, I looked at the non-track portions of my surrounding and saw that everything else looked like this: 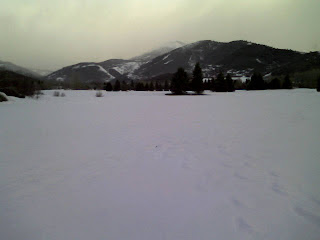 I tried it out, and found that I could ski on it just about as well as any groomed track that I've skied on, so I ended up getting in almost an hour-and-a-half of pretty good skiing in. I guess it's about as close as you can get to "backcountry" skiing on skate skis - it just happens to be on terrain that turns into a golf course in the summer. The main drawback is that if you aren't careful, you will be heading full speed down a hill and run into something like this: 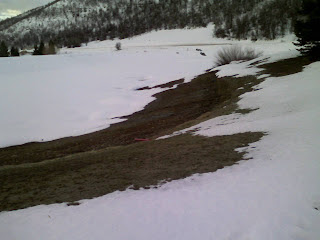 Fortunately, if you jump at just the right time, your skate skis give you some good lift and you can sail right over these 20-30 foot bare patches. In reality, it was more like me trying to do my faux telemark-turn stop before I hit these patches, which really looks more like a flailing snowplow turn. I haven't figured out how to do anything on skate-skis beyond the standard V1,V2, and V2-alt, none of which I do all that well.
Anyway, upon returning to my car, I was greeted by a park ranger that was in the process of writing me up for skiing on the state park after the ski season had closed down. Apparently I'm quite the hell-raiser, what with all the illicit skiing, rolling through stop signs on my bike, and what not. Fortunately, I was able to smooth talk my way out of a the ticket he was planning on giving me, but was not so lucky on the expired registration ticket. Doh!

I met Fish down in St. George a few weeks ago for some good riding with good company. We finished building Fish's new steed, as has been well documented here and here. Mr. Sabrosa left out no detail in building what might be the most beautiful bike I've ever seen.

We took Fish's new bike for its maiden voyage on the Bearclaw Poppy trail. I was just about the only guy on a bike with gears and front suspension. Mr. Sabrosa and crew were bombing down sections like this on their fully ridged bikes - places that most people on full suspension would think twice about: 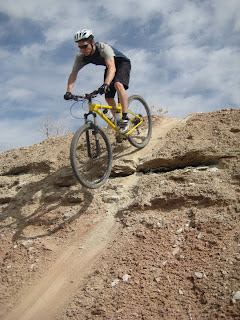 I don't have any pictures of the fully ridged bikes bombing this section, but you get the point. As much fun as it was going down stuff like this, I think we had the most fun trying to ride up. Here's Sabrosa just about ready to go airborn: 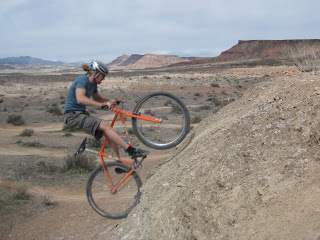 Here I am, I think on the same section: 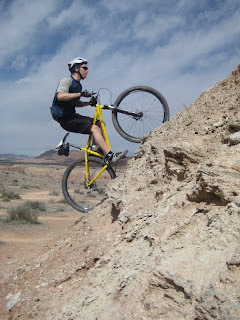 I have some other pics of most everyone on the ride, so I'll email them to you if you give me an address.
Posted by Aaron at 11:29 PM 1 comment:

By now, just about everyone knows people who have dated someone they met online, and probably even know at least one person who has married an online acquaintance. For a while, this type of thing raised a few eyebrows, but now it's pretty much standard practice. Even with its widespread acceptance, when asked about it, the participants inevitably respond "I normally never do this sort of thing, I swear!"

Well yesterday, I had my first online bike-date. I met Rick (http://ride29er.blogspot.com/) via his blog as a result of some bike-related internet browsing. I normally never do this sort of thing, I swear, but being a new transplant to "the U.C.", I've been doing a lot of lunch riding by myself lately, and was frankly getting a little bored of it. I googled "lunch ride" "utah county" in hopes of finding an organized weekly ride, and Rick's blog was the #1 hit. I mentioned this in his comments section, and we eventually hooked up for a mountain bike ride last night up on the BST. Rick was on his single and was climbing well (compared to me). He was some good company for one of my first rides on the dirt this year. It was good to have someone to chase, since I think I get pretty complacent while riding by myself on my lunch rides.

Anyway, if you haven’t tried online cycling, you should give it a shot. Once you get used to it, it isn’t too bad (other than the raised eyebrows you'll receive from your non-cyclist friends).
Posted by Aaron at 11:38 AM 4 comments:

Yes, I know it's spelled "Chamois." However, I went with "Shammy Time for a couple of reasons:
1) "Shammy" is cooler than "Chamois." Let's face it, "chamois" just looks pretentious, and none of my family or non-cyclist friends would know how to pronounce it.

Okay, so it was pretty much all because of number two. The blog will chronicle my time spent in the shammy, the things I think about while in the shammy, and perhaps a few out-of-shammy experiences. So yeah, it's pretty much like any other blog about riding. But you know that you are just dying to find another way to waste time while at work, so I'm here to help you out.
Posted by Aaron at 10:40 PM No comments: