Since the last time I did a race report, I raced the Sundance I-cup, two Wednesday night races, and now the Draper I-cup. The Sundance race can be summed up by the conversation I had with Ricky the following Monday:

Ricky (after looking at the results): What happened to you on Saturday?
Me: Nothing. That's what happened.

Yeah, so the race was kinda like that. I felt like I had a good lead-up to the race, I felt good during warmup, and I thought I had a good start up the pavement. A few people passed me during the race, but I thought we had a big group at the start line, and I figured that at least half of them were behind me. I was able to push pretty hard till lap 3, when I felt a few cramps coming on, which got bad on the last climb up the pavement, but didn't cost me any places. It wasn't until I eventually checked the results that I realized I finished much closer to the back of the pack than the front (of the finishers - I'm still convinced that we had quite a few DNF's, which don't show up on the results sheet). Frustrating because I felt like I raced about as well as I could, but still had a pretty mediocre finish. I had a mechanical with my MRP chain guide, which cost me about 3-4 minutes, but honestly didn't make much of a difference in the results. 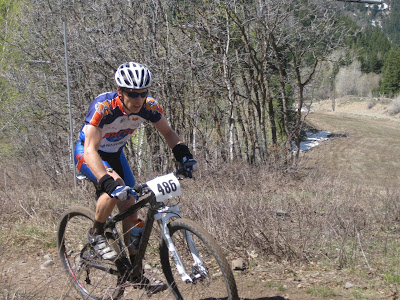 Then, I raced at Soldier Hollow and Sundance on Wednesday nights in the Expert B's. Does racing with the B's mean I'm sandbagging? Who knows. Who cares. Last year, I was forced into the Expert A's, and finished DFL a couple times. In my first B race at Soldier Hollow race this year, I finished 3rd behind Dan Z (who recently recorded a fast time on the Dry Loop Time Trial) and Rick. At Sundance the next Wednesday, I finished 2nd behind Dan (Rick didn't show, and World Champ Brandon mechanicalled (yes, that is a word) before he even started). I raced Sundance on my Single Speed, which was my first race ever on my SS. It was fun and painful, and took a bit longer to recover from. For those of you who ride every day on a SS, hats off to you. So anyway, comparing my finishing times to the Expert A class, I'd still be pretty darn close to DFL, so I'm stuck in limbo between the classes. For now, I'd rather battle for a finishing place that has some significance in the B's rather than race alone off the back in the A's.

Today, I raced in the Draper I-cup. If you check the results (Monday's version), you'll see that I had the race of my life - tied for first in Expert 30-39. I've never raced that fast. Seriously, NEVER. And maybe someday, I actually will (race that fast) - without the assistance of a clerical error.

To cut to the chase, I actually finished in 11th, out of 26 finishers (not 1st), with a time of 2:03:50. I felt pretty good today. Started out reasonably enough and slowly worked my way up for most of the day. I really like this race - especially the insane start that quickly funnels down into singletrack. Even with a huge lineup at the start, I felt like our entire group was flying up the singletrack, so I never really felt like I was being held up. Eventually got into a good battle with Chad A. (who lamented about having a bad day... and then outgunned me to the finish). I definitely will need to find the next gear to hang with the podium finishers, but I think I'm making some progress. I had a couple minor mishaps today: once when my rear tire washed out on the long left-hand switchback at the end of the new single-track descent, and another when I smacked my left hand into a tree (the same hand I jacked up in my Rawrod crash). None of them actually knocked me to the ground - just enough to stop me and make me restart.

I'm happy with the result today, but really, it just goes to show that you can't look at your result to meter your success, because your result often just depends on who shows up (more accurately, who happens to finish).
Posted by Aaron at 9:44 PM 1 comment:

So I rolled into work last Wednesday, and my co-worker came into my office to complain about the weather. Something about another day of rain in May, as if this is the first time it has ever rained in Utah in May. I told him that bad weather is all a matter of perspective...

The crew hiking up Toledo Bowl, Wednesday, May 12th, before work: 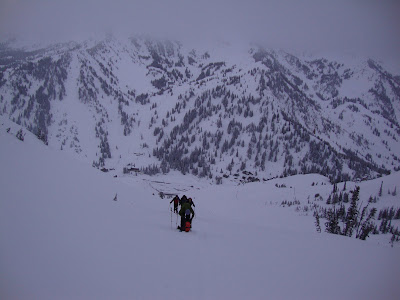 Father Cottle and his progeny dropping into Holy Toledo, and looking quite good doing it: 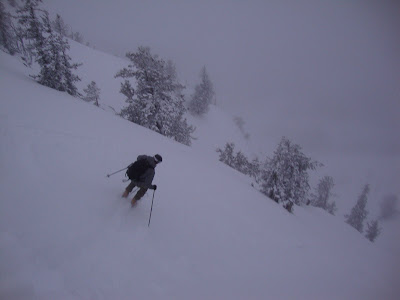 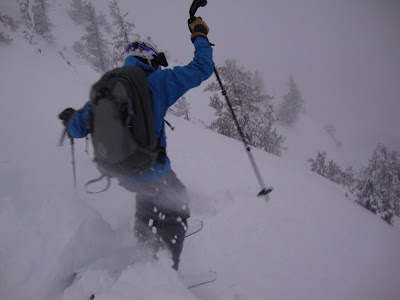 Maybe if I had spent my time this Winter on my trainer rather than doing this, I wouldn't have gotten my teeth kicked in at Sundance on Saturday. Even if that's true (which I doubt), it's been totally worth it.
Posted by Aaron at 9:03 AM 3 comments: 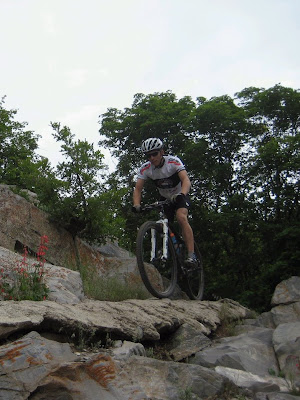 Last year I wondered whether anyone would break the 40 minute barrier, and 4 people went and did it. This year, is it possible to break 35 minutes?
I was thinking about deleting the routes ridden by each rider, since everyone seems to be going with Betty to Lament to Dry. However, the trail building fairies have added a new option to get to the Alter, and I'm interested to see if anyone uses it.
Last year, we had a few holdouts. I think we may need to organize a lunch meeting soon in order to establish some benchmarks for measuring the remainder of fiscal year 2011. We'll each leave the shooting range at 1 minute intervals and do our best to catch the carrot in front of us. A bit anti-social, maybe, but my lungs are usually burning too much during lunch rides to talk anyway.
So go shred the trails, record your time and submit your result. You'll have to be pretty fast to dislodge Kevin from the top spot for this year. To see some Dry Canyon insanity, check out the last minute of Miles' video:

If I were one of those avid bloggers who categorizes posts, this post would be filed under the "not at all related" category. Or maybe the "strange coincidence" category. Which brings my to my next point (although I never really had a first point): why do bloggers spend time categorizing posts? Does anyone ever actually click on a category? I, for one, have never clicked on a blog post category. If I ever did click on a category, it would be on Dug's "toilet/bathroom" category. Wait a minute, I just checked and Dug doesn't even have a "toilet/bathroom" category, which reaffirms my belief that blog post categories are useless.
... but I digress (assuming it's possible to digress without ever being on point in the first place)...
Earlier this morning, I read the following piece of Barbie literature with my daughter: 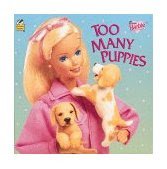 I've always gotten a good chuckle out of the name of this book, for reasons that will become apparent in a moment (unless it is already apparent to you, in which case you are awesome).
Immediately after reading this fine piece of literature with my daughter, I hopped in the car and started listening to one of the local high school radio stations. An utterly forgettable song finished, and the next song began:
Seriously, what are the odds of that happening? This is a song that's probably been played on the radio, what 3 times in history? (it's not exactly radio friendly) I read "Too Many Puppies" with my daughter, and 5 minutes later "Too Many Puppies" is playing on the radio. You know it's going to be a good day when coincidences like that happen.
Posted by Aaron at 3:37 PM 11 comments:

With Mother's Day right around the corner, I'm sure I'm not the only person scrambling to find a gift that acts as a down payment for all the races and rides planned for the upcoming summer. Shoot, who am I kidding? For most of us, it's more like a small payment against an insurmountable pile of debt.

Well, I've found the perfect gift for you. As cyclists, most of us suffer from a disorder that plagues us as a consequence for our ability to consume amounts of food that most non-cyclists believe to be humanly impossible. It also doesn't help that burritos act as the main staple of our diets. Yes, I speak of flatulence. The experts will try and tell you that money and infidelity are the main causes of divorce. Let's not kid ourselves. Flatulence is the number one marriage killer.

So give your sweetheart the gift that keeps on giving. It might just save your marraige:


My wife let me in on this little secret. I wish I could say she was joking when she told me about it.
Posted by Aaron at 1:36 PM 5 comments: