The mountain biking trails around have been in near perfect condition. So perfect, in fact, that it's almost a shame that I missed out on riding the trails for a while during my trip to the Bahamas. Okay, so that is a BIG almost.

We spent a few days at the Bahamas' mega-resort in Nassau doing some work-related stuff, which I must admit was just about the most amazing man-made place to sleep that I've ever seen: 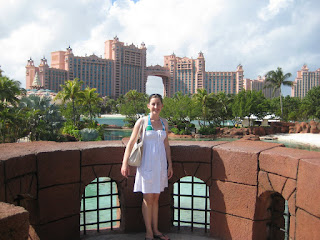 The scenery while walking from our room down to the beach looked like this: 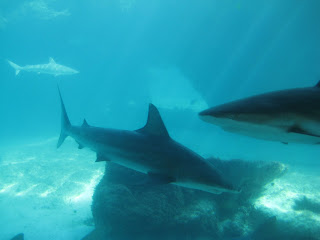 After a few days at the mega-resort for the conference, we boarded a 15 minute flight to a tiny island called Mangrove Cay (pronounced "Key"), which is part of the Andros chain of islands, which is part of the 700+ islands that make up the Bahamas. Before I get to Mangrove Cay, it's worth mentioning that the airline that took us there would only accept cash. That's right, CASH! I'm not sure why, but for some reason, I felt a little uncomfortable entrusting my life to an organization that only accepted cash. What's more is that the Bed and Breakfast we were staying at required that you wire cash before you arrived. I felt like I was involved in some illegal cash money laundering operation. Fortunately, the airline got us to and from Mangrove without incident, and the B&B was friken' awesome.

The arrow in the picture below points to the spot we were staying at: 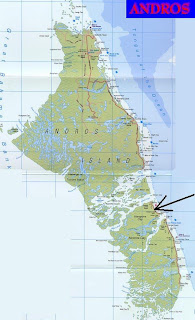 Mangrove Cay was as opposite as could be from the Mega-resort in Nassau. Mangrove Cay only got electricity in the 1980s. The people lead a very simple life. These kids lived next door to the place we stayed are growing playing on the beach most of the time: 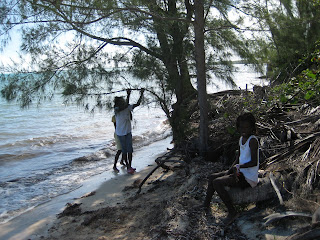 I met this guy one morning on the southern port on the island. He says he's lived his entire life on Mangrove Cay. Although the island itself is 10 miles long by 20 miles wide, the only part of the island that is inhabitable is the half mile strip that is closest to the east beach because further inland is completely infested with Mangrove Trees (thus the name), which means he's lived his entire life on about 5 square miles. He couldn't have seemed happier: 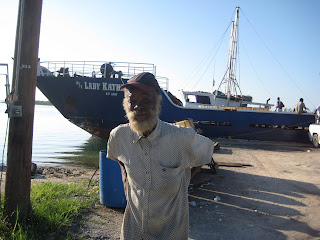 The stay at Mangrove Cay offered some great recovery time: 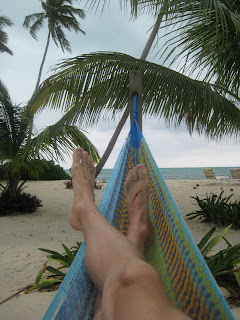 And the recovery time was much needed after all of the hard-core training we were getting in using the bikes that Mickey (the owner of the B&B) let us borrow: 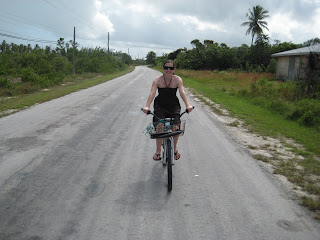 As Chad has previously pointed out, the best way to see a new city or place is on a bicycle, and we got to see a lot of cool things while traversing the island on two wheels: 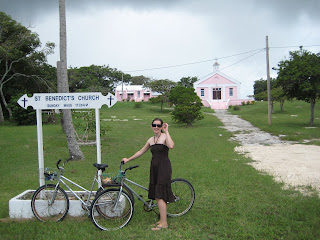 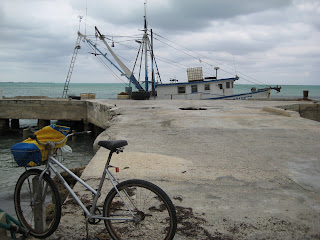 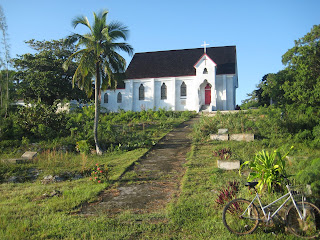 Apart from a lot of laying around, we rode out to quite a few "blue holes" for some snorkeling. The blue holes on Mangrove Cay are a series of underground water-filled caves that occasionally break through to the surface, both inside the island and also just off of the beaches (think of them as the places that Caribbean pirates would hide their treasure). The mixture of fresh and salt water make for a perfect place for marine life. In one blue hole off the coast, we must have seen over a thousand fish swimming around in the coral. In another inland blue hole, I was swimming alone while Wesla was taking a nap and a four-foot long version of one of these follow me around for a few minutes: 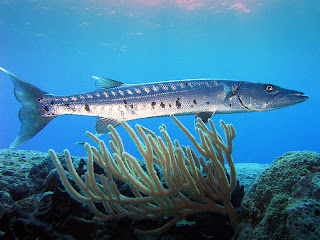 That's a barracuda, in case you don't recognize it. Apparently, it's quite common for them to follow humans around, mistaking us for sharks that will leave behind some scraps of food for it to scavenge for. I also saw a sea turtle swimming around in the same blue hole.

The main thing I left Mangrove Cay with is a greater appreciation of the simple things in life. The locals were as happy as could be, even though their possessions were about as basic as you can imagine. While I'm not planning on giving away all my possessions and moving to Mangrove, it did make me realize that all of the crap I have doesn't mean anything without family and friends to enjoy it with.

That is a pretty sweet gig you have being able to mix work and play and bring your wife along. And hey you even got a ride in.

Sweet trip and good write-up and photos! I love the islands, mon.

Wow! I love the Bahamas...what a rich nature, amazing!! I must take a cruise to there in my next vacation to Miami...!

I have heard so much positive thing about Bahamas. Infact, this place is among the top 10 places on my must-visit list. You have given an insight information about this place. I am sure this would be very helpful when i would be visiting this heaven on the earth.

I certainly enjoyed the way you explore your experience and
knowledge of the subject! Keep up on it. Thanks for sharing the info

You have become like a guiding light to me. When I started a project
on similar topic I could not get enough information to carry further.
But as soon as I read your article, my project is doing great and
I hope to get an A+ this time. thanks

the information of this post is very relevant
for what i am looking for, thank you so much for sharing this one

Thank you so much for this information. It's so nice to have all this sharing, so useful and inspiring. I really appreciate the time and your effort you put to it. Great work, well done indeed!

I'm not sure why, but for some reason, I felt a little uncomfortable entrusting my life to an organization that only accepted cash.

it's worth mentioning that the airline that took us there would only accept cash. That's right, CASH! I'm not sure why, but for some reason

I felt like I was involved in some illegal cash money laundering operation.

so sandy beach with very nice people around.

I believe the body is a living organism in constant balance.
This balance requires intervention at the right time and area to ensure
the body's most efficient and healthiest state.
Back Pain Relief Houston