Remember the whole "Primus Sucks" thing? You don't? Well fortunately you have me to explain. Back in the day, all of the cool people (everyone who listened to Primus and thought that they didn't suck) had at least one sticker that said "Primus Sucks." These stickers would often adorn skateboard helmets, snowboards, and the bumpers of really cheap cars.

The casual observer would see these stickers and think, "hmmm.... I wonder why that young man feels it necessary to express his disdain for 'Primus', whatever 'Primus' means." The casual listener would listen to Primus and think that Primus did actually suck, due to Les Claypool's crazy voice or Ler's random and screachy guitar. However, little did the casual observer/listener know that Primus didn't actually suck, so the whole thing was very clever.

Anyway, Saturday morning was kind of like that. The casual observer would think that waking up at 5:00 am to go uphill a few thousand feet on a splitboard or skis, when ski lifts exist less than 3 miles away, only to turn around and snowboard/ski down in less than 1/10th the time would totally suck. However, those of us lucky enough to be in the know realize that it actually doesn't suck. So again, I feel very clever in saying that Saturday morning sucked.

Here's the documentation of some laps on the "Mini Chutes" (the name and the pics lifted from Adam's site), and how badly it sucked:

Here is one of me (and as Adam mentioned, this was at least 3 days after the last snowfall): 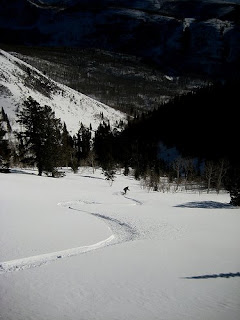 Here's one of Adam: 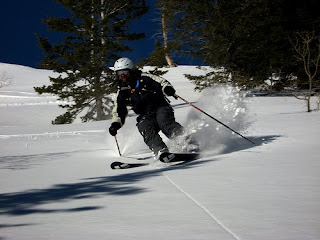 This morning consisted of more suckiness. I woke up to find 8 inches of snow, as measured by Utah County's official snow meter (a metal table on my back patio, which seems to accumulate snow more quickly than anywhere else in my yard). I had planned on turning a few solo laps in the "Mini Chutes" again, but got scared off by the potential road conditions above Sundance and getting buried alone. So I worked for a few hours in the basement and headed up for some first tracks at Sundance instead.

You can imagine my disappointment when I pulled into the Sundance parking lot, to find only about 1 inch of snow. That's right, at the base of Sundance, they had 1/8th as much snow as I had on my metal table on the back patio.

I was already up there, so I figured I'd better get a run in. And anyone who's been to Sundance much knows that the back mountain can have an entirely different weather pattern than the front mountain, so I'd better check it out.

I'm glad I didn't turn back, because my first run down Bishops featured about 15 inches of untouched Utah Smoke. I played around on the Flathead lift for a while, which can have some of the best terrain at Sundance, but I was scraping bottom a lot so I headed back to Arrowhead. Bishop's looked pretty tracked out, so as I thought of which line to take down, I remembered Adam's recent post about a run to the far north side of the Arrowhead lift. I traversed in that direction only to find a rope that somebody had apparently forgotten to remove. One skier had proceeded me, so I ducked under the rope and followed the tracks to find huge stretches of untouched snow.
Each time back up the lift, I'd look over at my tracks on Hill's Headwall and pick out the next best line down, until there were 5 of my tracks and 1 track left by the skier.
Not a bad morning. Not top 3 of the season, but definitely better than my top 3 work days of the season (well... except for that one day when my boss visited from Cali and I convinced her that we should spend one of the days snowboarding, and it happened to be a powder day).
Posted by Aaron at 1:40 PM

I am happy that you are having fun while I work. Can't complain, it is nice to be busy again at work.

Primus does in fact, suck. I went to Lollapalooza 93, and Primus was the headliner. Alice in Chains was right before them and was great. But Primus was disappointing. So we left. Because it was like 100 degrees and we had had no water all day.

The skiing you did, however, looks nice. Really nice. You gonna join us tomorrow for more?

I'll be there tomorrow, Mark. You'll hear me coming - I'll be the one with Primus cranked on my car stereo.

that's my kind of post--anecdotal intro that seems to have nothing to do with anything, then boom, it leads right into skiing.

I watched Primus at Saltair when I was in High School. I loved every minute of it. But adding to Mark's point, sometimes at the concerts where a ton of bands play, bands seem to mail it in. I went to the Horde tour one year and some of the bands were great, others were lackluster.

But the skiing we did on Saturday, and yesterday, was not lackluster.