Because my posts have been pretty infrequent lately, and mainly to bury the first two images I used in my last post, I've decided to do the unthinkable and post twice in a single day. Last Saturday, I got all tri-geeked out for the Bash Winter Triathlon.
I raced this last year, and felt like I did pretty well for my first "tri." Last year, I showed up and immediately felt intimidated and overwhelmed. There were all these guys and gals that seemed to knew each other, had the awesome gear, and knew what they were doing. And here I was, having run a total of 3 times that year in preparation, trying compete with them. Well, it turns out that most of the participants last year were hacks like me, and most importantly, the majority of them appeared to have never ridden their bikes off-road (and the bike portion was on very soft groomed snow) and didn't know how to cross country ski.
This year, the competition and difficulty was raised up a notch. Or maybe 5-10 notches. It turns out that winter triathlons are somewhat of an official event, with a national championship and even a world championship. Last year, the national championship was held in Bend, Oregon. Apparently there were quite a few "real" triathletes there. Even Ned "the lung" Overend showed up and "only" managed a 6th place finish. I know he's getting up there in years and all, but he's still pretty dang fast.
It just so happened that this year, the winter triathlon national championship was being held right here in Soldier Hollow in conjunction with the Bash Winter Tri, and the top three finishers would be sent to the world championships in Norway. I figured that the level of competition would go up due to this, but I didn't expect it to go up by as much as it did. Oh, and Ned didn't show up. I think I scared him off.
To compound matters, the triathlon included a mass start of two completely separate races. First was a "full" triathlon, which was a 5k run, 10k bike and 8k ski. Second was a "sprint" triathlon, which was a 5k run, 5k bike and 4k ski. I found out during the race and afterwards
while looking at the results that the full triathlon was primarily made up of the fast guys, and the sprint was made up primarily with the hacks (like me). I (somewhat foolishly?) had signed up for the full triathlon. It went a little something like this:
The Run:
Have you ever had that dream where you are being chased, or maybe are chasing someone else, but you feel like you are running underwater? No matter how hard you try to run faster, you just seem to go slower? If so, then you pretty much know how the run went for me. I was a little bummed out because I'd actually been running for the past couple months and had started to feel like I could run sorta fast. Not really fast, mind you, but sorta fast. I had run a 5k in about
20 minutes (again, not really fast, but an improvement for me) and was hoping to be able to run in the softer snow in 21 or less. I ended up taking a few minutes longer, and could never snap out of whatever funk I was in. On the one minor hill on the course, it was all I could do to not start walking. 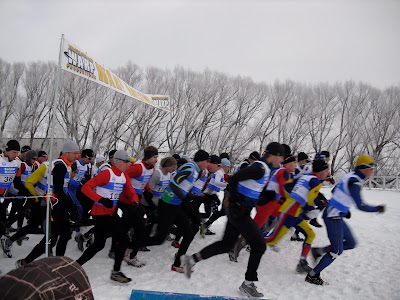 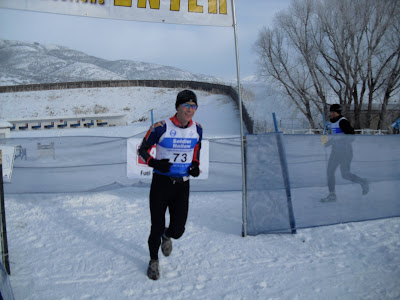 The Bike:
I was really hoping to ride this with an aero-bar and aero-helmet to fully embrace the inner tri-geek, but decided to go with the normal helmet and flat bar. I was really happy to stop running and get on the bike since I was finally in my element. The conditions were really soft by this time, because we were riding on the same snow that we had just run on. The soft conditions favored a mountain biker and I was able to pass people quite a few on the first lap. The second lap was tricky to know how you were doing because we were catching some lapper traffic (and some of the "sprint" racers), but I had a a good time trying to rail some of the snowy corners on the descent. 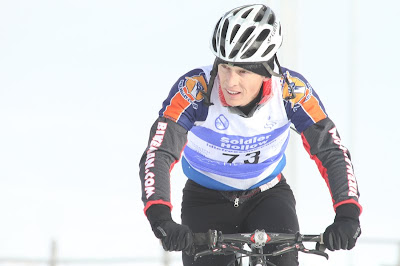 The Ski:
The greatest thing by far about winter triathlons is that there is no swim portion. Not only because it would suck to break through the ice in Deer Creek Reservoir in order to swim through it, but because swimming sucks in general. I'm sorry if I've offended you, but it does. The way you train is by floating (or in my case, sinking) in a literal pool of other people's filth and swimming back and forth, looking down at a painted line that warns you when you're about to bash your head against a wall. You don't actually go anywhere or see anything that's worth seeing, so it's becomes pretty mind-numbing. I've even heard that companies are selling waterproof mp3 players in order to reduce the suckiness of swimming.
Instead of swimming, you have a XC ski leg, and XC skiing is awesome, even if I'm not awesome at doing it. Since the ski was replacing the swim, the inner tri-geek in me wanted to ski in a speedo and goggles, but I figured nobody would want to see that. And in that 10 degree weather, there would probably not be much to see... but I digress. Last year, I was one of the faster skiers. But what I didn't realize at the time was that the real skiers didn't show up last year. This year, I think I'm a better skier, but got smoked by the a bunch of guys who were seriously fast.
I got onto the skis and realized that I was already cooked from the run and bike. My legs felt like jello as I tried to get around the 4k course two times. I was grateful for the few people on classic skis who made me feel fast on my skate skis. However, at the end of my first lap, I was going up "the wall" (you may remember it from the ICUP races at Soldier Hollow), and was barely going faster than the guys who were literally walking up it. Then a rocket came by. The overall winner was on a rampage. I honestly didn't think it was possible to go that fast up that steep of a hill on XC skis. It reminded me of my first mountain bike race at the "Desert Rampage" in 2006 when Bart Lapped me while heading up the wash in his big ring, me in my granny Laberta. Both inspiring and humiliating at the same time.
I found a little bit of juice on the second lap, but not much. It was clear that I had made the mistake of overtraining the week before to try and compensate for our Costa Rica trip. 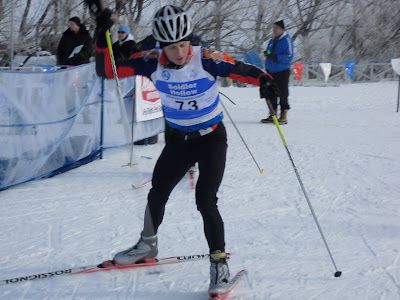 You'll notice that I'm still wearing my helmet during the ski. I was apparently tired enough during the transition from bike to ski that I'd completely forgotten about it. Now instead of a tri-geek, I'm tri-dork 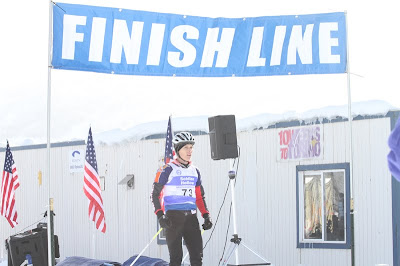 In the end, I didn't do quite as well as I had hoped, but the Winter Tri is a fun race that serves as great motivation for the months of December and January. I'd like to do it again, but the $70 price tag seems a bit steep for a 1.5 hour race. I guess I'm just accustomed to the $35 mountain bike races. But since I'm a sucker, I wouldn't be surprised to find myself at the Bash Winter Tri in 2011.
Posted by Aaron at 12:37 PM

Glad to see you favor style (helmet) over speed.

nice work. I can relate. I signed up for the PowderKeg backcountry ski race a few years ago and did the "race" div instead of the "rec" div. Unreal how fast those Euro racers are. I was totally out of my element. But still one of the coolest events i've ever done. Nice job on finishing.

Your description of the helmet on the ski leg busted me up. Awesome.

Well, this post didn't bury the images on the last post. I got to the end and there they were, staring at me and me staring at them. Sounds like you're all set for top 3 finishes on the podium at the icups this year.