For the 1 or 2 people that may or may not read this blog:

I'll be in Sandy this afternoon, so I figure I'll get in a ride while I'm down there. I'm thinking Equestrian/Lynn Ballard Park, 5:15pm. I know there are a bunch of trails that I've never ridden before (like Jacob's ladder and Ghost falls), so if someone wants to show me the ropes, please join me.

Good preparation is the key to good racing, right? This race was a good wake-up call that I need to pay more attention to the preparation. I'm not talking just about going to the Jazz game the night before in the big city, I'm talking about inconsistent riding, and that small detail of making sure that the bike is in good shape...

The race started with most of us staying fairly close together and a couple of guys shot off the front. I let those guys go in hopes that I'd see them again. I did see end up seeing them all, with the exception of the winner of the day, who finished with an 8 minute lead.

I settled into the 4th spot and was feeling good on the initial short climbs. I dropped my chain on one of the climbs, cursed myself for not tweaking my derailleur that I knew was having problems, got the chain back on, and kept going. Then, about 2.5 miles in, things suddenly got uncomfortable. My seat clamp slipped and suddenly I couldn't sit down without nearly slipping off the back of my saddle. Within one minute, my seat was pointing almost strait up, giving me an enema that is never overdue. I lost some time while hitting my saddle in hopes that it would slip back into place, and while cursing myself a second time for using my flimsy multitool to set my seat clamp on Thursday evening. In a fortuitous twist of fate, Jared rolled up next to me and complained that his seat had slipped and was tilting toward the sky as well. I responded that my seat was having the same issues. He had a tool that he'd let me borrow at the top of the hike-a-bike. I have no choice but to stand up for the next mile or so till we reach the hike-a-bike. You know it's bad when I'm actually looking forward to reaching Yellow Page Hill. We reached the top and I twiddled my thumbs while Jared fixed his bike. He handed me the tool and took off while I fixed my seat. This time I cranked my seat post down as hard as I could. I jumped back on, but not before being passed by 4 people from my group and losing my rhythm.

I struggled on the gradual climb after the Yellow Page decent. Motivation was hard to come by, since I couldn't see anyone ahead of me. I jumped into the slipstream of someone who caught me, and that helped. On the steep climbs to finish the lap, I passed a couple of guys in my class who appear to be having some mechanical issues of their own, which also helped.

Most of the second lap was better, and I felt the rhythm coming back. I caught another guy from my class before the hike-a-bike, and really try to push things on the home stretch. On those last few climbs before the end, I could see one more guy from my class in the distance and used him as a rabbit. I gambled on one of the last climbs pushed to catch the rabbit. My only hope was that he'd be blown, because I had nothing left. Unfortunately he wasn't, and after seeing me he took off. After the race, he mentioned that he thought I was ahead of him because he didn't see me when he passed me at the top of Yellow Page on lap 1. I finished in 4th place, 30 seconds out of 2nd.

Although this was only my first race of the year, I can't help but be a little disappointed. My finish time was only around 25 seconds faster than my time last year. I know I had the saddle issue, but last year I had to stop and save a contact lens that had fallen out, so I consider those two events a wash. I was hoping to be further ahead of where I was last year at this time. Time to get a little more consistent in my riding. Nothing like next week's 5 day work trip to get me back on track, right?
And if the derailleur and seat post were not enough, I really botched the most important part of race prep, which is mounting the number plate. The crooked plate really threw off my balance: 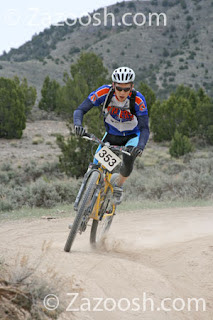 Well I guess I am one or two people. Next time you are around Sandy give me a call. We'll ride especially with a days notice. -Ryan-

Sorry man, I should have called you earlier. I was thinking that you'd have a tough time making the 5:15 start because I needed to finish by 7. I'll call you next time I'm down there though.