Each time I come home from a race, I take my numberplate off my bike, write the details and results of the race on the nameplate (e.g., Draper Race, 05/08, 1st place - sport), and attach a ribbon to the numberplate if I placed in the top 6. I had them all hung up in my old garage, but since we recently moved, they are sitting in a box. Over the past year or so, I've been accumulating quite the colorful collection of ribbons while hanging out in the Sport class. This Saturday at Sundance, I decided to make the jump to expert. Let's just say that I expect my numberplate collection to be a lot less colorful for the next while. But like my buddy Ryan said about his move to expert a year ago, "who cares about another ribbon."

I certainly don't feel like an "expert", but I figured the sooner I made the jump, the sooner I'd start adjusting to the new level of competition. I lined up at the back of the group, which seemed huge after racing against 10-15 sports each week. I was getting a few looks from other riders, and they may have just been eying up the new competition, but I'm pretty sure the looks were because they didn't like the idea of a non-leg-shaver infiltrating their class.

The race started and I was immediately surprised by the fast pace. I'm not sure if it's this fast every week, or if it was faster this week because of the 1-track we were heading to that makes it tough to pass. I noticed that I was at the very back of the pack, with only Mad Dog Scott (my old pal from the sport class) behind me. I tried to step on the gas, and managed to go into the singletrack with 4-5 guys behind me. 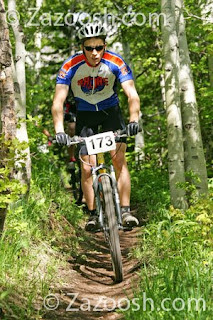 There's not a whole lot else to say about this race, other than that Scott and one other guy passed me during the first two laps, and I passed one other guy just as the 3rd lap started. I was able to put 3 minutes between me and the guy I passed during the last lap, so I was glad to see that I had something left for the last lap. 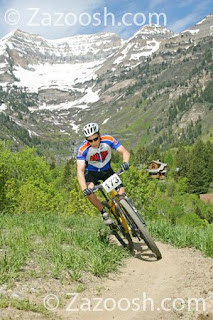 Random thoughts:
*I finished behind about 75% of the expert class. I guess that's probably about where I should start after just moving up, so I'm not disappointed. I have a long way to go before I'm hanging with the top guys (3 minutes per lap, which seems like a ton), but if I can just shave 1 minute off per lap, I'd be finishing mid-pack.
*In a way, this felt like a 2007 sport race - 2 minutes behind Scott, 4 minutes behind Carson.
*About 2 years ago, I moved from beginner to sport, and I remember feeling the need to hold back on lap one just so that I could have something left in the tank for lap 2. If I didn't, I'd seriously end up soft-pedaling for a while during the race just to finish. By the time I decided to make the move this past week, I was able to push hard for the entire 2 laps (but felt dead by the end). On Saturday, I noticed myself holding back again on laps 1 and 2 because I was afraid I'd blow up if I didn't. Hopefully it doesn't take another 2 years before I can push it for 3 laps.
Posted by Aaron at 3:52 PM

You will work out your pace and strategy and gain from it. You are an expert and will do well, that category is large and motivated, give it time, it will come

Shaving your legs will get you another 3-5 places. Come on man, just try it. Everybody in your category does it. Plus, the feeling is out of this world. Seriously, I'll never forget the first time I got into bed after shaving.

The sport to expert jump is a tough one. The pace is screaming fast. But you are a strong rider. I am sure those ribbons will start piling up soon enough.