Last week I was able hit up the weekly race series up at Sundance to wrap up what is probably the most I've ridden over a 5 day period so far this year. Probably because I hadn't gone 5 days without bad whether or travelling for work. I was peering into the pain cave on lap one because I didn't even have the strength to go all the way into the pain cave. Lap two was much better, until I got outsprinted at the line. I guess I should probably work on sprinting once or twice per year. My result was actually a little better than expected though, and it was good motivation to push myself quite a bit harder than I would have otherwise. Best of all was the laid back race atmosphere, hanging out before and after, and winning a new canister of CarboRocket in the post-race raffle.

Father's day was a good day. Slept in, and then heading back to Sundance for some quality grub. If you've never tried the Sunday Brunch up there, you're missing out. But I actually would rank Snow Basin's brunch even higher if you live up north. Anyway, each time I do this brunch thing (it's become a father's day tradition over the past 3 years), I always wonder if I'll be able to make the transition from eating french toast, omelets and bacon during round one to eating prime rib, turkey, and mashed potatoes during round two (and rounds three and four). It turns out that I have no problem making that transition, nor do I have a problem transitioning to the desert table during round five. My daughter pretty much just started and ended at the desert table: 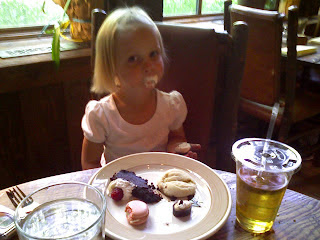 She ate for free, by the way, but they're probably rethinking their policy after Aubrie cleaned them out.

We headed home, and Aubrie and I left to go on her first fishing trip. Tibble Fork looked more like a zoo than a lake, so we kept driving till we got to Silver Lake. After a bunch of near misses, she finally landed the big one: 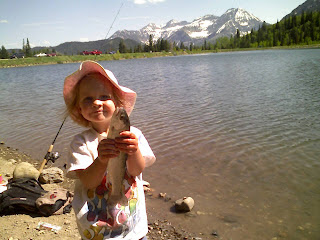 I don't think she really expected to have a fish on the end of the line, because when we finally got this whopper of the water, she was more excited than I'd ever seen her, and let every person at the lake know that she had caught a fish. She was jumping around and screaming like a little girl. Oh wait... Needless to say, we'll be back fishing again sometime soon.

Finally, we went to dad's house for some bbq ribs and some cake. Since no ice cream was served, I remedied that when I returned home with a nice big bowl during the NBA finals. You're supposed to eat a lot the day before a race, right?

So, back to the title of the post. It's time to finally try out this "biathalon" at Soldier Hollow tonight. And by the way, can someone explain to me this inside joke of spelling it "biathAlon"? Is it just to distinguish it from the skiing version? Anyway, since I'm all about the art of intimidation, I think I'm going to try and dig up my old boy scout sash, which includes a rifle shooting merit badge, and wear it during the race. I figure that if people realize what a good shooter I am, they'll probably just give up.

Good post. The story and photo of your girl catching the fish is tops.

I didn't get the biatAlon and triathAlon thing for quite a while, but I think it's making fun of the fact that many Utahns put the extra A in there. But I could be wrong.