Let me start off by saying that this may have been the greatest birthday party ever. You were all invited, so if you missed it you only have yourselves to blame. I went into the American Mountain Classic with hopes that it would be the most epic adventure I've had on a mountain bike. Now that it's over, I can say that it exceeded my expectations.

Before proceeding, I should probably mention that I did not go through with my plan to move up to the "Open" class from the "Sportsman" class. I had seriously considered moving up, but got a bit intimidated by the field. Since the top "Elite" class was filled with the fasted guys in the country (e.g., JHK, Jeremiah Bishop, Tinker, Manuel Prado, etc.), I thought it would have a trickle-down effect, causing the "Open" class to be filled with semi-pros and top experts. I did some google detective work on the guys in the Open 30-34 class, and my suspicions were confirmed. Everyone in that class had a long list of race results listed on usacycling.com in semi-pro and expert mountain bike races, and cat 3 road races. Having never done anything like the AMC before, and knowing that I'd be racing against similarly skilled guys like Tony Parkinson in the Sportsman class, I decided to stay where I was at. As I'll describe over the next few days, Tony and I ended up having a great time racing against each other, so I'm glad I stayed where I was.

Wesla, Chad and I drove down to Brian Head Thursday morning and arrived in time to check into the hotel/condo and line up for the "prologue" on day 1 of the race. I think the race promoter was afraid that the Thursday stage would be too big of a time commitment for too many potential racers, so the Thursday stage was shortened to 7 miles and racing it was optional. The results of the stage would be used to determine your starting position on Friday morning. Knowing this, I used Thursday as a chance to spin out the legs at a very leisurely pace, and to get used to riding at 9500 feet. I rolled in about 6 minutes behind the winner of my class. It only cost me about 5 feet the next morning, so I think my strategy was a good one. I came away from the prologue having learned two things: 1) Brian Head trails are technical and a lot of fun; 2) Tony was obviously on good form, finishing only 24 seconds behind the winner of our class.

I hoped to get a great night's rest before Friday's 55 mile stage since I'd been up late the last few nights getting ready for the trip. A combination of nerves, uncomfortable bed, noisy sheets, restless wife, peeing 5 times, and being out of breath just sleeping at 9500 ft limited my sleep to about 2-3 hours. I finally fell asleep, just in time for the 6am wake-up call. I ate as much as I could (which wasn't much) and we headed to the start of the race. Here are a few pics of the staging area: 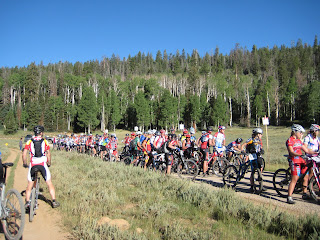 The fast guys chomping at the bit: 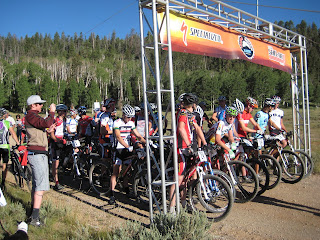 The fast guys sprinting at the beginning of a 160+ mile race: 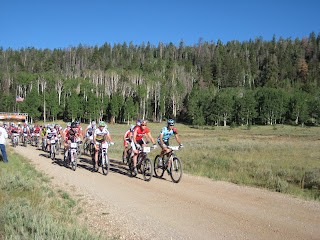 The slow guys (me) going out easy: 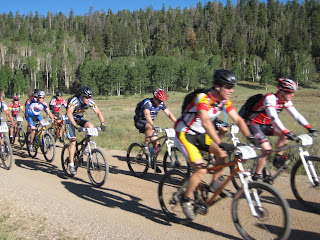 The race started with a 1.5 mile decent down a dirt road, which I used to make up for the 5 foot disadvantage I started with due to my slow time in the prologue. Despite receiving multiple warnings from the race directors about a sharp right hand turn at the bottom of this hill, I went into it a bit too fast and in the wrong gear. The road went uphill at the corner, and I dropped my chain trying to downshift. Tony went by me and already had a good gap by the time I got going again. I thought about chasing him down, but he was climbing way too quick for me this early in the race, so I let him go. It was the last time I'd see him that day. During one of the descents on the dirt road I saw local Art O'Connor off to the side fixing a flat. Bummer.

After a few more ups and downs on dirt roads, we funneled onto the Virgin River Rim Trail (VRRT). If you have ridden this trail, you know how great it is. It's a series of semi-technical climbs and descents. One of the great things about the AMC is that almost all of it is on the kind of single-track that I normally seek out when I'm not racing. The views from the VRRT aren't bad either: 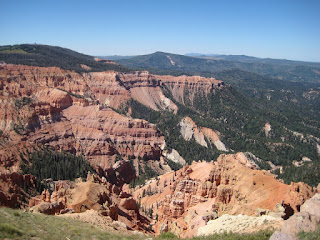 After a few miles on the VRRT, we were dumped back onto a flat dirt road for a few miles of riding into a headwind. I hopped on the back of a train and after drafting for a minute or so, I took my turn at the front. It didn't take long to realize that this train was only going to have one engine, and that engine was me. Art O'Connor came flying by trying to catch his class and I sprinted onto his wheel, leaving the train behind. Even drafting behind him was probably a bit too much for me that early in the race, but I hung on till we got back on the 1-track.

We started climbing and the crowds were still pretty thick. I played leapfrog with a few guys, including at least one from my class. A few miles into the climb, I saw Chad off to the side fixing a flat. Double bummer. I stopped and gave him my only CO2 and tube in hopes that I'd have good fortune until the 1st feed zone. Turns out Chad had some problems fixing the flat that cost him 20 minutes or so. He must have been down for a while, because it took him 15 miles or so to catch me. Fortunately I made it to the first feed and restocked on supplies, food and water. I'm pretty sure I rolled into the 1st stop in 3rd place for my class behind Tony and one other guy from Revolution.

I felt really good from the 1st to the 2nd feed zone. There was a lot of climbing topped off with great views and fun descents. After miles and miles on the VRRT, we temporarily left it to do a loop around Navajo Lake, which included another dirt road into a head wind. While on the dirt road, I met a guy named Clayton Bell who came all the way from Arkansas for the AMT. He ended up winning his Sportsman 20-29 class, and earned the title of toughest rider in the process. I'll tell/show you why in my day 4 write-up.

After the 2nd feed zone, we had about 18 miles left. I felt good for the first 8 of these, but really started feeling the fatigue during the last 10. Most of the big climbs were over, but the short steep stuff was starting to hurt. The trails were a blast, but were filled with of rock gardens that were really starting to wear on me. A full squish would have been nice so that I could sit down and pedal, but with my hard-tail 29er, I had to stand in order to pedal through the rock gardens. The stage ended with a treacherous descent down a dirt road. I checked the results and I finished the day in 5:06, 9 minutes down on Tony and 10 minutes up on 3rd place. Day 2 was in the books, having covered 55 miles and almost 6000 feet of climbing. I was already loving the idea of stage racing, and was formulating a strategy to try and get some time back from Tony on stage 3.

The race between the big guns was shaping up nicely. Bishop out-sprinted JHK to take a 2 second lead after day 2. That's right, after 55 miles of technical single-track, only 2 seconds separated the top 2 riders. And their finishing times were an unfathomable 3:42.
Tinker won the Elite Masters category, finishing 25 minutes or so after JHK and Bishop.

Stage 3 write-up (and maybe stage 4, depending on how much time I have) is coming tomorrow.
Posted by Aaron at 9:42 AM