August 23rd - Birthday Stage:
To pick up where I left off, I ended the 2nd day of racing about 9 minutes behind Tony. I headed home and had a tough time eating for a while, but the appetite finally kicked in and I was able to put away a pretty good amount of food. I was sure I'd get a good night sleep after the long race and the previous nights' lack of sleep. After prepping all of my race gear for the next day, I hit the sack, tossed and turned for hours, and finally got 4-5 hours of restless sleep. Not enough, but it was going to have to suffice. I headed to the staging area and found that many of the racers who were staying in Brian Head were having a tough time sleeping, likely because of the altitude (9500 feet). Any of you Leadville racers have a similar problem?

The course today started right in Brian Head and consisted of an initial climb and descent, followed by 20 miles or so of flat and rolling fire roads, followed by a huge climb to the top of Brian Head Peak, and then the final descent back to Brian Head. I knew that the next day (stage 4) would feature a ton of climbing, so I figured if I was going to get some time back from Tony, it could possibly be during the flatter dirt roads and the technical descents on stage 3, since I knew Tony was a stronger climber than me.

We lined up and started with a mass start. The pace was easy for the first 5 minutes or so, but it picked up in a hurry. Tony was pushing the pace on the climb a little faster than I was comfortable with, but I kept him in sight. It was nice to gain some "easy" elevation on the paved and dirt roads because I knew we'd get it back at some point. We reached the top and started a fun, fast, technical single-track descent on the "Lowder Ponds" trail. I felt pretty fast on the descent, and hoped I was gaining on Tony. The descent seemed to last a really long time, and I can't wait to ride it again under non-race conditions to enjoy the 1-track goodness a little more. The trail emptied onto a dirt fire-road, and I started trading pulls with another racer and we were making good time.

The first feed zone came quickly and I still had a bottle-and-a-half, as well as a good riding partner, so I rolled on through. I was still in chase mode, so I was putting in some hard pulls. About 10 minutes later, I got a pat on the back. I turned around and there was Tony. Apparently, Tony was stopped in the feed zone as I rode through. He saw me and jumped on his bike to chase me down. I'm impressed he did it alone.

Tony and I rode together for the next 15-20 miles or so, along with a few others we came across along the way. There were a few times I thought I had a gap on him that might stick, but he kept coming back every time. There was an out-and-back fire road at the far-end of the course that was a really fast pace. I was hanging onto a train that was quite a bit faster than I was comfortable with. The road wasn't too smooth though, so a lot of effort was wasted trying to stay with the train. Tony never wavered though, although he did confide at the end of the stage that he was hanging on for dear life.

A few miles past the out-and-back, the road started to turn upward. It didn't take long to realize that I was going to pay for my efforts on the flats. Tony started riding away and I couldn't match the pace. The next 20 miles were going to be brutal, and there's no such thing as a comfortable place inside of the pain cave. I tried to keep a decent pace, knowing that the biggest climb of the entire race was in front of me. I put my head down and climbed for what seemed like a really long time up a dirt road. Finally, I saw a support vehicle parked to the side, and an arrow pointing the racers to the left. I dropped into a single track descent and thought, "Hey, I'm okay! That wasn't too bad!" Unfortunately, my relief was short lived. After a half-mile, the descent quickly turned into a steep, brutal 1-track climb. Granny gear was the only option for me. For a long while, the steep sections just got steeper. I felt lucky to be on my bike, since I was passing quite a few racers who were walking it like the pioneer children. I finally rounded a corner at the "top"... only to see the trail quickly descend through a small valley and keep going up up and up.

After what seemed like forever, the trail finally leveled off, and a dirt road appeared in the distance. It was finally over. I could see the descent to the left. My joy was full. Wait a minute. What are those people on bikes doing hundreds of feet above me on that other dirt road? Are they still climbing? My heart sank when I realized that I still had to ride an out-and-back to the very tippy-top of Brian Head peak. Man, while writing this, I'm confirming what I already knew about myself - I'm a total head case. If things go differently than expected, I have a tough time shaking it off. This was a perfect example. Demoralized, I dropped back into the granny and climbed to the top of the peak. 11,300 feet. On the way up, I saw Tony zipping down. I figured he would have already come through by now, so seeing him gave me some hope. I made a note of the time and place I saw him and pushed to the top. I'm pretty sure that when I reached that peak, I was at the highest elevation I'd been at since I was in Colorado in 2001 (airplanes excluded). I think that even the Snowbird tram only tops out right at 11,000 feet.

I turned around and flew down. Amazing how much longer a road seems while traveling at 5mph as compared to traveling it at 35 mph. I reached my Tony sighting spot and saw that I'd lost 9-10 minutes. Somewhere on the descent, a rock must have flown up and hit my front derailleur, because I could no longer access the small ring. Fortunately, the single track that followed only had a few short steep pitches before the final descent. The descent was yet another fast and technical piece of single track with one very unwelcome little climb. I rolled across the finish line in 4 hours 40-something minutes, about 6-7 minutes behind Tony, putting his overall lead at 16 minutes. I had about 20 minutes on 3rd place. Stage 3 was in the books, with another 53 miles and about 5000 feet of climbing. I was really afraid that my efforts on the flats had caused me to bonk on the latter climbs, and was not looking forward to how it would affect me on Stage 4.

Despite being on the verge of bonking, I was glad I raced the way I did. I wasn't going to go down without a fight. It didn't seem to work - in fact it probably backfired, but hey, at least I tried something. I still had one day left, and you never know what may happen. I was gaining a whole new level of respect for the stage racers at the grand road tours. I still can't imagine how they do what they do for 20+ days at a time.

The race among the big guns was still incredibly close. Bishop again outsprinted JHK at the end of the stage by about 4 seconds. So now, after 115 miles of racing, 6 seconds separated the top two guys in the US (that weren't at the Olympics). The results of stage 3 are here.

Post-race birthday festivities:
I got home and had no trouble at all with my appetite. I seriously ate nonstop from 2pm till 7pm. And then ate some more at 8 pm. And again at 10pm. I fixed my front derailleur, got my stuff ready to go for the next day, and headed down the canyon with Wesla, Chad, and Mags for the highlight of the evening, the cultural event of the summer. No, I'm not talking about the Shakespeare Festival. I'm talking about the Parowan Demolition Derby. Cars were smashed, mullets admired, belt buckle sizes compared, and voices lost: 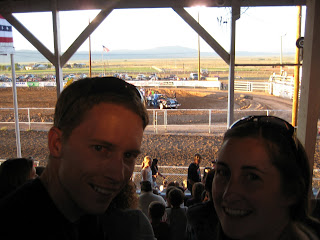 Side note: It looks like I'm not the only one who thinks Cadel looks a little bit hobbit-like. BikeSnobNYC's picture is classic!
Posted by Aaron at 10:19 AM

I'm enjoying reading your reports about the stage race. Looking forward to the rest.

I have ridden the climb that you are talking about. The steep, uber steep climb, the valley, the climb again and then the monster of a climb to the shanty at the top of brianhead. My heart was about to jump out of my chest and I was pretty certain that I was going to get struck by lightening up there. Nice finish! Very impressive.

Aaron - nice race and even nicer write up. I was hoping to get something like this from my homeboy Tony. He said he really enjoyed duking it out with you day after day. We need to get together for some more Friday lunch rides.

Thanks for the comments. Day 4 write-up is almost complete.

Jon - let's start the lunch rides again soon. It's supposed to cool down again, so lunch rides should be perfect.