I started the year off right with Kenny's freeze-fest up Squaw Peak.  Here we are at the bottom before the gate and the snow: 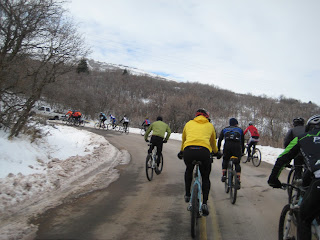 And here we are at the top (stolen from KanyonKris' blog): 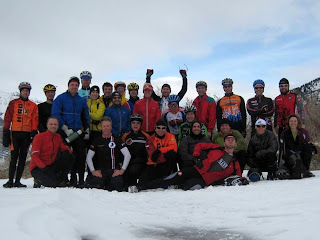 The snow was nice and grippy, for the most part.  I had a few close calls on the way up, but really thought I was going to make it to the top without putting a foot down.  Then at the T before the overlook it got really soft and I finally succumbed to the snow.  From there, I walked at least 3 more times.
Bombing down in the snow was a barrel of monkeys.  Descending in snow is a good way to learn  to trust your bike.  As Craig put it, avoid your front brake, put your a$$ back, and let 'er rip.  Interesting side notes: Craig F. and I grew up in the same neighborhood.  I probably hadn't seen him for 15-20 years until cycling brought us back together.
I've been making pretty good use of my season pass to Sundance.  I think I'm up to 4 days on the skate skis and 3 days on the snowboard (when I say "days", I really mean 1-1.5 hour sessions).  It will be interesting to see whether I put in more days on the lifts or more days on my skate skis by the end of the year.  It really depends on how may powder days we get, because although Chad and I had the running joke about how great all of the "powder days" were last year while skating at Mountain Dell, the pow pow is really meant to be shredded on the snowboard.  On the other hand, a recently groomed icy trail is the perfect conditions for skate skis.
Random thoughts:
I think that skating is to skiing what road biking is to cycling.  I guess that would make backcountry skiing like mountain biking, and my lift-assisted snowboard runs like the highly caffeinated downhill mountain bikers.
I really love the skate skis, just as I love a good road ride on occasion.  However, just as my heart belongs to mountain biking, I have a feeling that backcountry skiing or snowboarding would be the ultimate.  The downside?  Death I suppose.  A long, slow and painful burial. Well, that minor detail and the cost of entry.  Are most back country skiers sitting this year out due to the avalanche danger, I wonder?  Or is it a bunch of media hype that can be avoided by one with the proper training?  Either way, someday I think I'll either have to learn to downhill ski and buy an AT setup, or buy a splitboard.
The nice thing about skate skiing is that as long as there is snow, the skating is good, even if the snow would suck for any other snow activity.   My coworkers can't understand how I could possibly enjoy suffering on CX skis in single digit temperatures.  I guess I can't expect them to, just like I can't expect them to understand the joy of a long climb on the mountain bike.  But usually if you get one, you'll get the other.
Okay, so one last random rambling.  I pulled my daughter around in her CX ski sled this morning up at the Sundance Nordic center.  I can't tell you how glad I am that I have a little girl who loves the mountains, loves the snow, and especially loves fishtailing around some of the fast, tight and bumpy turns coming back down to the base.  I thought I was going to lose or tip her over a few times while skiing down, but she was hanging on with white knuckles and grinning from ear-to-ear!  I can't wait till she's on her own skis.  Hopefully sometime this year.    And if you thing that skiing up those hills is tough normally, try pulling a sled up there!
Posted by Aaron at 7:52 PM

Send me a picture please of this sled thing you pull your girl in. I am curious.

I'll try to remember to snap a picture soon. To give you an idea, it basically looks like any regular sled with a small windshield and a cover that can be zipped over her legs. Her body is mostly exposed above the sled. I shove a warm sleeping bag inside to keep her warm. There are some metal tent-pole-like bars that extend about 8 feet from the sled to a waist strap that keeps her a constant distance behind me. There are some high-end versions that look like an enclosed bike trailor on mini skis, but they cost arount $400-500. I bough mine used for $70.