God Save the Queen

I'm rolling solo in the UK for a week for work.  Before heading into the office, I had the afternoon free, so I made the most of it in London.  Arriving at Paddington Station: 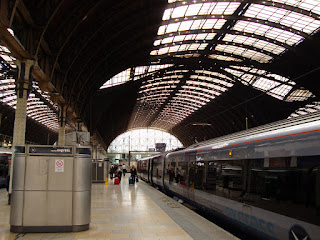 The bottomless Tube station:
No trip to England would be complete without some Fish and Chips.  Mmmmm... greasy...

Wesla and I visited England back in 2000, and although I'd gladly revisit many of the places we saw back then, I opted for the British Museum, which we missed the last go 'round:

In short, it was probably the best amazing collection of stuff I've ever seen, aside from the bike collections of a few friends.
I can only hope to leave half the legacy of this Egyptian guy: 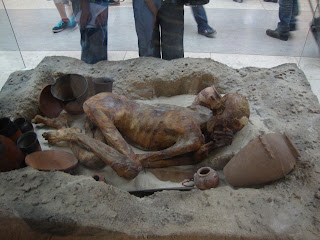 Seriously, nobody will remember me 50 years after I die.  10 years?  Okay, I'll give myself 2 years.  (except for my big sport-category win at Sherwood Hills last year - that will be talked about for centuries).   Here we are more than 2000 years later, and we're still admiring this dude.  When I die, please mummify me and put me in a museum.  Thanks in advance.
As my readers know (all 3 of you), there is no better way to see a city than on a bike.  So after the museum I went on a bike tour of London with "Fat Tire Bike Tours."  Here I am rolling in style: 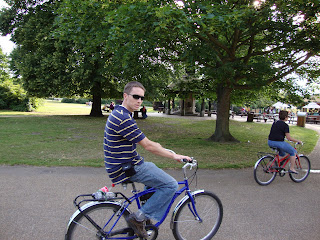 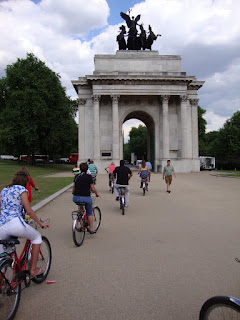 We made a stop at Westminster.  I can't believe how many dead kings they can fit into these cathedrals.  As they say here in the UK, "loads." 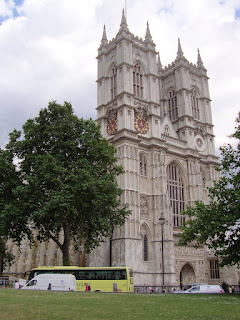 Some important building somewhere in London: 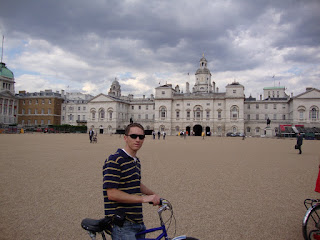 During the bike tour, we stopped by a Princess Diana Memorial in the Kensington Gardens.  It's basically this man-made stream that circles around part of the park, goes down a few small rapids, and comes to a rest at the bottom.  Our tour guide (who was awesome, by the way) says that the river represents Princess Di's life, which had a few rough spots and some smooth spots.  Then some genius in the group says, "well, shouldn't there be some rapids at the bottom to represent the crash? Ha ha ha..."  Um.... Awkward...  I think the peanut gallery guy underestimated the esteem in which the English hold their queens and princesses, because our tour guide wasn't laughing.  I suppose the guy had a point though...
We finished off the tour and I "slayed" the sprint finish. Um, I mean I "slew" it.  Unfortunately I was going way to fast to get a picture of my big win.

A few things to love about the UK:
1) Their tendency to under/overexaggerate.  You say something they agree with and it's "brilliant."  Their grandmother dies and it's "a bit of a drag."  Their tea is bad and it's "ghastly."
2) The old English people. Love them.
3) Driving.  Love the small and zippy cars.  Love the craziness of driving on the left.  Love the flowiness of the round-abouts.  Love the drivers (in the US, people would be honking and flipping me off for the stupid things I've done during my adventure of driving on the left. Here, they just wave and let me get on with it).  I only hope that at least once before I leave I will remember to get into the right-side door so I don't have to look in the glovebox in an attempt to appear like I meant to open the wrong door before walking around to the other side.
One thing not to love:
1) The food.  Everything they say is true.  When you're here, get the Indian food.  Trust me.
Posted by Aaron at 3:20 PM

does that include the new reader from the national park service?

I hope you took it easy on the other bikers in your group. Enjoy some time away.

That's because all traditional English food is devoid of any spice whatsoever and is indeed "ghastly"!

I guess it's three, plus the guy from the NPS, plus some random princess di stalker from google, because you now have four comments. I was really hoping to be the fourth commenter, by the way.

So is it Rick, Dug, or Keith that's the random stalker from google?

Once again the best way to see a place is on a bike. We will start a collection for your mummification now.

They let you off the hook with your driving cause they read your post about your superpowers behind the wheel.

Dug - I was actually thinking of him, his mom and his sister. They are all big fans now. Sorry I forgot about the rest of you.