So close. I coulda shoulda woulda finished the Wasatch Classic. But I blew it.

The quick version: I started a bit slow, then felt amazing. Nothing could stop me. Except getting lost. Twice. I was going to run out of light and food so I had to cut out the Crest/Mid-Mountain loop and call it a day.

8 of us met in Midway at 6am, including Adam, Essam and John from Colorado, Rob from Arizona, Reed, Rich, Derrick and me. 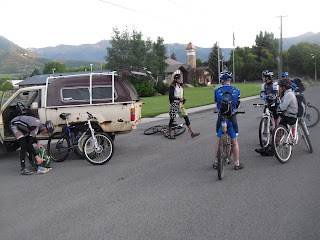 Rolling out of Midway: 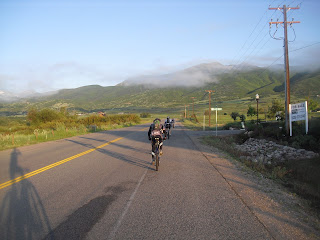 Derrick, Adam and I climbed the 5000 feet out of Midway together. Here is Derrick trying to conquer the WC on his single-speed: 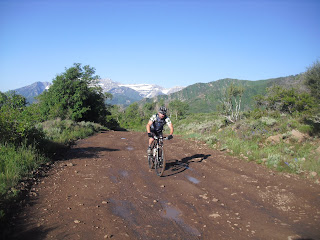 The views back toward Deer Creek were spectacular: 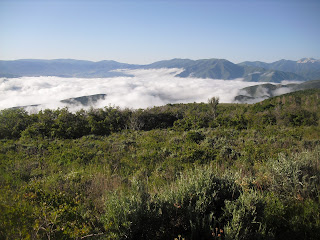 I rode the singletrack up on Ant Knolls for the first time. It is some of the best in the Wasatch: 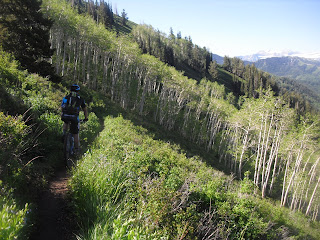 And then there were the views. It honestly does not get any better than this: 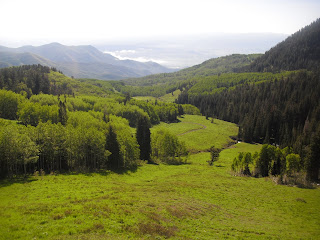 But these aren't bad either: 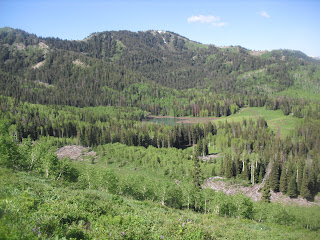 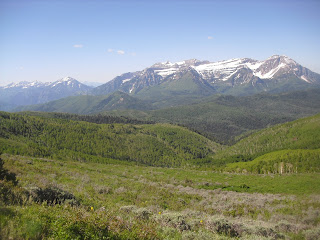 Adam on the ridge: 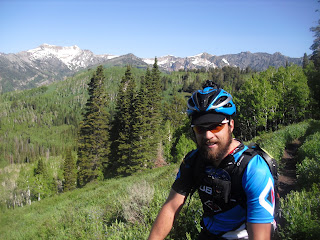 After Tibble (which has been entirely ruined by motos, in case you haven't heard), things started to get interesting. I was feeling great on the climb and made it to a Y in the road. I looked on my map, looked at the signs, and looked at the turn-by-turn instruction sheet, and was positive I needed to turn right. Well, after about 1000+ feet of climbing, I realized that I was mistaken. After cussing up a storm and nearly throwing myself off of a nearby cliff, I turned around and got back on route.

The wrong turn meant I was on my own for the rest of the ride. I thought I could still finish if I could ride strong until Catherine's pass. I made it to the top of Dry Fork and figured out how to start up Catherine's Pass.  Then I made like the pioneer children and walked and walked and walked.
About half-way up Catherine's Pass (who is this Catherine Lady, anyway?  I was so sick of that bitch about half-way up. I wonder if she was related to Scott?  Have you noticed that Scott named everything in the Wasatch?  Scott's Pond (Sundance), Scott's Pass and Hill (Big Cottonwood), Scottie's Bowl, etc.  Man, what an egomaniac), the trail turned to snow, and I eventually lost the trail, as well as the tracks of the WC'ers that went before me. I didn't have a GPS, so I saw a pass that looked like where I needed to be heading and started hiking up.

Eventually, I was hauling my bike through areas like this (I told you Catherine was a bitch): 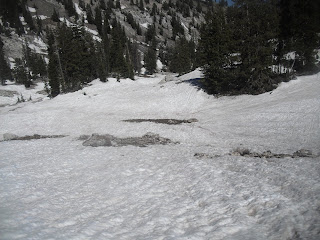 It was brutal, but you can imagine my relief when I got to the top of the pass. I looked down the other side expecting to see a trail down to Lake Catherine. My heart sank when I looked down and saw this: 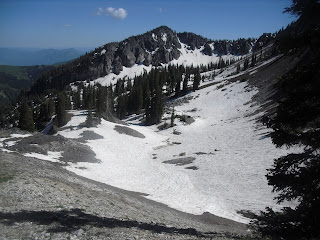 No lake, no trail. After spending a while looking at the map and the peaks around me, and walking around another ridge, I realized that I had ended up at the top of Alta. I was tempted to slide down the snow banks to the bottom of Alta and call a ride to get home. But I realized that Adam would be waiting for me in Midway and I had no way of getting in contact with him. Rather than risk showing up on the nightly news, I spent the next hour or so walking across snowfields, rocks and cliffs with my bike (Damn you Catherine!): 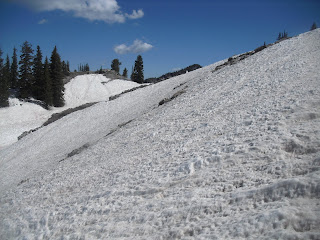 I finally traversed over to Catherine's pass and made it down to Brighton (which was no easy feat either, by the way). Like I mentioned earlier, I didn't have enough light or food to make it around the Crest/Mid-Mountain loop, so I had to climb over Guardsman and roll down into Midway.
As you may have guessed, during the hike over Catherine I swore that I'd never take a bike over her again. But I have to admit, it did make for an amazing and memorable adventure.  I'm pretty sure that I took my bike across sections where a bike has never been.  Not that that's always a good thing.  Plus it's not Catherine's fault that she's so steep and rocky, or that I got lost, so I should probably stop cursing her name.
By the time I made it home, I had this nagging question in the back of my head about whether I could have finished if I hadn't spent so much of my time and food while lost. I'm pretty sure I could have, but there's only one way to find out...
P.S. I should mention that the Wasatch Classic is officially doable.  Reed finished it. And maybe Rich - I haven't heard what happened on his ride yet.  I should also point out that Reed only finished after making his first attempt last year and getting lost on the same road I got lost on this year.  So maybe it's a sign of good things to come.
Posted by Aaron at 11:20 AM

Y'all are a bunch of badasses for taking that thing on. Strong work.

Had we stuck together, I may have been more motivated to hit the Crest/MM. By the time I reached Brighton I was wet and grumpy.

Seriously, let's do it again. Maybe in late July?

Wow. Im not sure if that even sounds fun. Im digging the photos, nice.