Things have been a bit hectic around here, but better late than never. Fortunately, things got crazy the week before the Canyons race, which made for a nice forced taper before the race.

I pre-rode the course a couple of weeks before and predicted that we'd see some crashes. The descent is high-speed with a lot of blind hazards and unpredictable off-camber turns. But surely those crashes would all come from the other people. Riiiiight....

The imaginary gun went off and I immediately loved this race. With the long dirt road climb before the single track, most of the group seemed happy with a nice mellow pace to start. It was a nice change from the "sprint as fast as you can before the singletrack" start that is typical in my class.

The pace eventually picked up before we filed into the singletrack. I was feeling good at the time and a few people in front were slowing down. From what I can remember, everyone was cool about passing at the Canyons race. It was very refreshing. If anything, I was the person holding people back, but I did offer multiple times to let people by.

I made a few passes before the descent started. Well, with the course, you think that the descent is starting, but before you know it, you're climbing again: 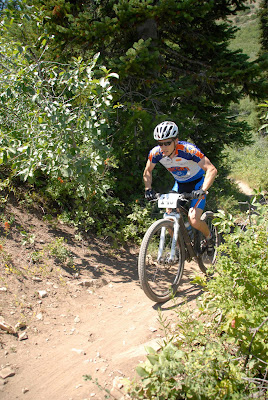 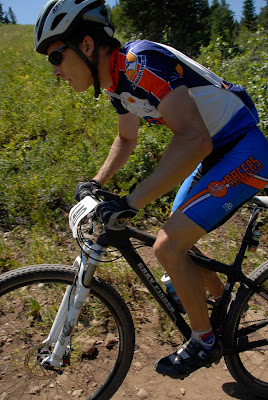 The second lap started and I was feeling pretty good. I felt like I was climbing okay, but everyone seemed to be flying today. I had a few guys on my tail that I just couldn't seem to shake. I finally made it to the top, and then quickly remembered, that the top is really more of a false flat that doesn't let you relax much.

The descent was fast and fun: 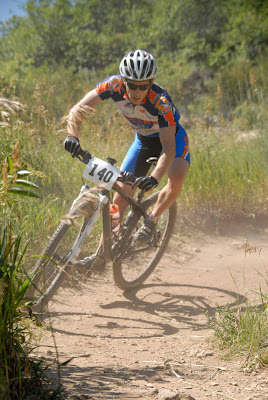 On the last lap, I was still feeling okay, but had no idea of my positioning. I made a few passes on the climb and was making desent time until that last straight away that just seems to go on forever. I think that the climb started to get in my head a bit. At the end, it all seems to look the same. I convinced myself a few times that I was at the top, which never came. Finally, I accepted that I had a while to go, and 2 guys in my class jumped around me just before the top finally arrived.

I closed the gap on the false flat and on the beginning of the downhill. I finally caught back on during the mid-descent climb and when the downhill started again, the guy in front was cool enough to let me pass without asking. I went by and could see the next guy up ahead. I was pushing as fast as I could and finally was about to make contact just as one of the off-camber right-hand turns snuck up on me. Before I knew it I was flying over my bars and into the bushes. It looks like my pre-race prediction came true in an ironic and unwelcome way.

All of my limbs were attached, so I started to climb back out as the guy I had just passed leapfrogged me. I followed him down the rest of the way, and he was smart not to let me pass again. Between the sketchy switchbacks at the end and the lapper traffic, I had no chance to contest the sprint and finished in 7th, 30 seconds out of another visit to the tweety chair.

All in all, it was a great way to end another great i-cup season.
Race details

Thanks to Scott at primelite photo for the great pictures! Search by your race number and you're likely to find some good pictures of you.
Posted by Aaron at 11:07 AM

Here is your 2010 ICUP goal: keep the rubber side down.

So, whats next? There is a lot going on this fall...

Nice racing at the icups. Youre damn fast.

What's next? I'm going on strike until a certain man by the name of Nails gets on his bike again. I think an intervention may be necessary to make it happen though.