I wish I were reporting on a visit to Interbike from a few weeks back, or maybe Cross Vegas (can hacks like me even race in that race?), but alas, I was in Vegas for a riveting work-related conference instead, and missed Interbike altogether. And unlike last year's conference, I didn't even get invited to a strip club in attempt to land my company as a client.

I did, however, have a few experiences worth remembering. I headed out for a few rides in the Red Rock/Cottonwood area again, which is a great series of trails. Except for the fact that you can't cut corners quite the same way you can around here without risking some serious repercussions. I thought my shins were pretty well covered in callouses from riding the overgrown Timp Foothill Trails this year, but they were no match for this bad boy, which was strategically placed on the inside edge of one of the many fast corners: 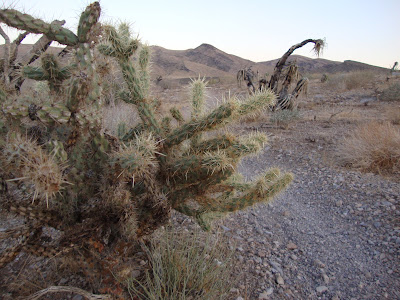 The damage may look minor in this picture, but these little spines were rock-hard and were embedded almost an inch into my leg. 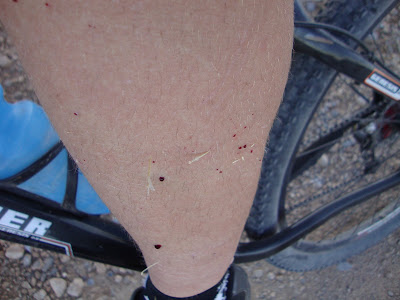 And to top it off, each of these needles was barbed. So for the few of you out there who actually have hair on your legs, imagine grabbing a 1 inch by 1 inch patch of leg hair, yanking it out, and then repeating about 20 times. That's basically what it felt like to remove these cactus needles. As if the pain of colliding with the cactus wasn't enough.

A bit later I hopped over this little dude who was strung-out across the trail. I think it's a bull snake, but I'm no expert.

He put on a pretty good show when I came back to check him out. Crank up the volume and listen to him hiss at me:

When I raced Old Pueblo this year I rode into my first cacti. I looked down and had a damn cholla hanging off my fist wrapped around my bar, the spines imbedded in my knuckles and in between the knuckles. I feel your pain.

I hit a cactus this spring while riding down is Palm Springs. It hurt real bad pulling out the quills and then I accidentily broke a couple off in the process. I just got one of them that was deep in my forearm to come out like2 weeks ago. Everytime I think I got them all out another one comes to the surface. Freaky!