Sometimes I do Stupid Things

I was talking to a co-worker about all the number of bikes lining my garage, and he got a little hung-up when I got to my Felt Nine Solo single speed. He couldn't figure out why anyone in their right mind would chose to ride such a a silly contraption, and that doing so was stupid. The following conversation ensued:
Me: Well, by having a single speed, it forces you to push harder, so it makes you faster.
Him: Then why not just pick a gear on your Superfly that matches your single speed gear and not shift? Wouldn't that accomplish the same thing?
Me: Yeah, technically it would. But there's something nice about how simple and straightforward a single speed is. Fewer moving parts, you know.
Him: It's not like bikes are that complicated to begin with. Even a bike with gears has to be one of the simplest machines around.
Me: [trying to think up another good reason to ride a single speed...]
Him: Well, at least a single speed is lighter than a bike with gears since it doesn't have the cogs, chainrings, derailleurs, and shifters...
Me: Um, Yeah... except that it isn't. My geared bike is 3-4 pounds lighter than my single speed.
Him: [shaking his head at me...]
Me: I guess you're right. Single speeds are stupid. And sometimes I like to do stupid things. 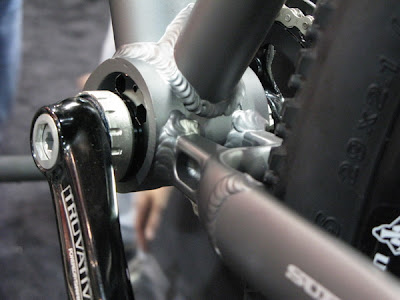 Look how "simple" the eccentric bottom bracket on my single speed is!
Posted by Aaron at 8:39 AM

"He couldn't figure out why anyone in their right mind would chose to ride such a a silly contraption, and that doing so was stupid"

well, the theory of relativity sounds pretty stupid too when you try to explain that. or string theory. or george w. bush.

Your bike is way too clean.

If my legs wouldn't explode I'd try SS. But so far I need the crutch called gears.

Have you seen Sabrosa's disc brake dropouts? Those are in fact very simple.

Adam, the funny thing about your comment is that I noticed I made the you're/your mistake on my email to a few of you about today's lunch ride. I guess I should stop making fun of people who write "your stupid", because karma will come back to get you.

Seems like you and I just had this same conversation about a month ago. We decided that single speed bikes are dumb and that those who ride them are stupid. Did you really think you could win this argument?

I never realized how cool the Felt welds are.

Don't try to expain it. Just say that only a bad ass would ride such a contraption. Then look at him straight in the eye with a little nod. "Yeah, that's right, I'm a bad ass."

I do stupid shit all the time, mostly related to bikes, I'll continue to do such things. I will also continue to call others Stupid, at the slightest whim.

Just call it a mono-speed. That sounds more Euro and should impress him.