Zero is the stat of the winter for me. The first stat, I'm rather proud of:
Number of hours spent on my trainer this winter: Zero
It's not that I've been sitting around all winter. I've had plenty of days on skis 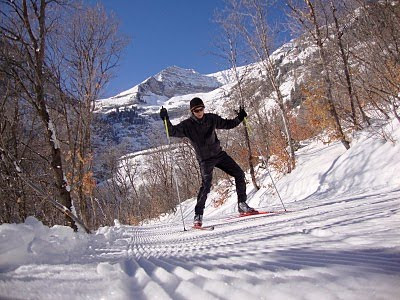 *You think taking a timed shot of yourself is difficult on a mountain bike? Try it on skate skis. And how awesome is the corduroy-close-up at the bottom?
...and in the backcountry: 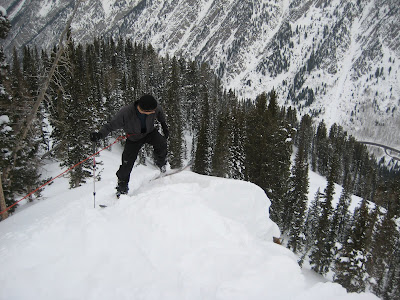 *Not surprisingly, the only picture I could find of myself from this season is while I was dropping a cornice while testing for avalanches. It's been that kinda year.
..it's just that the winter stuff is good enough that riding in the basement has lost its appeal. There has been a downside to achieving (yes, it is an achievement) zero hours of trainer time though. About half-way through the winter, I realized that zero trainer time was a possibility. Since coming to this realization, there have been plenty of evenings where a ride on the trainer would have definitely been better than nothing... but I certainly didn't want to ruin my chances of achieving zero trainer hours, so I just sat on the couch instead.
I'm a bit disappointed about my second zero statistic:
Number of trips I've made to St. George this winter: Zero
Seriously, what is up with that? And I call myself a mountain biker? I think I planned 6 separate trips to San Jorge this winter, and they all fell through either due to work, family, or most commonly, rain. Yeah, rain. St. George, what is wrong with you? I think you've only had a couple dry weekends this entire winter. And sadly, the all-knowing weather.com is predicting that this weekend won't be one of them.
As Brandon has documented, I have been out on my bike a few times recently. You know, my typical race preparation routine of cramming all of my race-specific training into the week before the race and then being surprised when I'm cooked at the race itself?
I'm hoping that my recent rides will offset the fact that the Girl Scout cookies arrived on Monday. I'm pretty sure that Rick paid off the girl scouts so they'd deliver them to me the week of the first race. Bastard... Anyway, if there are Girl Scout cookies in my house, I must eat them immediately. Even if it means eating four boxes of them. I think there's a rule about that somewhere. In fact just found it. It's Fatty's first axiom of junk food in pantries. I knew there was a rule for it. I'm pretty sure I'll finish the rest of them this week while not riding my trainer. It's called carbo-loading.
Anyway, speaking of Saint George, I really am planning on being there this weekend, rain or shine. Lemme know if you're up for a Sunday or Monday ride. I'll be on the family schedule, which means I'll probably be riding early.
Posted by Aaron at 2:07 PM

hey, that looks like the pink pine ridge, just before it gets really steep and turns into a booter.

Too bad it is supposed to rain tommorrow. Back to back BST mornings would be good. Then you could assure yourself of being cooked for Sat.

Awesome. Unfortunately, my indoor training hours for the winter are in the triple digits. Since I don't ski, the last few weeks I've been riding outside regardless of the weather to avoid training inside.

One of these weekends, you need to join me for the traditional post ride at El Pollo Feliz.