The one thing that I've learned about mountain bike racing during the past 4 years of doing it is this: I don't know anything about racing. Seriously, some days I think my preparation is perfect and I end up feeling like crap, and other days I think my preparation is lousy and I'll end up feeling great. Luckily, the Canyons race was more like the latter.

I spent the week prior to the race in Cali for work, and hadn't touched a bike at all. Well, unless you count the 5 minutes I spent on the hotel's recumbant exercise bike. After 5 minutes I decided I could either get off the bike or start repetitively slamming my head in the door. I think I made a good choice to stop riding.

I flew home on Friday afternoon, and then headed to 7-peaks water park with the family, which consisted of lugging a tube to the the top of the slide about 20 times with the youngins. I won't lie. Half of the reason I agreed to go to 7-peaks was to earn points with the misses so she'd let me race the next day. Hey, at least the other half was so that I could spend some time with the family. Because I'm noble like that.

I lined up in the back of the field with somewhat low expectations. I went out pretty slow on the first lap and was literally in last place for a good part of the first climb. I mainly focused on trying to ride efficiently in hopes that I'd pass a couple people on the last two laps.

I was digging the climb - nothing too crazy steep - and I really fell in love with the course as soon as I hit the downhill. Fast and flowy (especially up top), which is my kind of DH. Oh and that reminds me - one of the best things about racing in the Expert class (rather than Sport) is that pretty much everyone knows how to ride fast on the downhill. I mean, there are differences, but they are usually a matters of degrees rather than orders of magnitude. Which means that most downs are fast and fun, regardless of who you're following.

The second lap started and I experienced a rare occurance: I actually felt good. Better than the first lap, even. So I pushed and made some catches. Before too long, I saw my carrot just ahead - the only guy that really mattered to me in this race (but only because he's been putting the smackdown on me for... well pretty much this entire season).

I was able to get by one or two more guys and was hot on the heels of my carrot. Finally caught him on the DH and moved by him on the 3rd lap climb. I eventually caught Derek on the DH. I asked Derek if he'd let me pass or if he was going to make me earn it. He was suffering from an ill-timed blown headset, so he somewhat reluctantly told me that he'd let me take 3rd, which surprised me (not only that he was cool enough to let me go by, but also because I didn't expect to be moving into 3rd place).

Crossed the line, and a few hours later made my first ever visit to the Expert podium (not counting a handful of visits to the poor-man's podium (4th-6th)). I think it was Chad who once said that just about anyone could land themselves on the pro ICup podium if they showed up to enough races. Well, I don't know if that's true for the Pro category, but I've officially proven that it's true for the Expert: 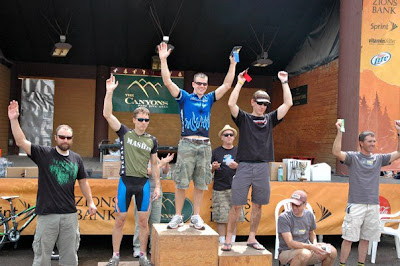 Here's what I love about MTB racing: if you show up with a Masher jersey and Racer's Cycle Service bibs, nobody thinks anything of it. I met up with some roadies for a very casual group ride this morning and felt quite out of place for wearing plain black bibs instead of full team kit.

Nice result. It always feels good to stand on the box.

And I love the mismatch kit (especially the jersey).

The way you blew by me was pretty demoralizing. Which is the only way to pass someone right? Nice result. Your ready for the P2P. We makin' another churro wager?

Nice finish and write up.