The weekend started early - 5:10am on Friday morning, to be exact. I was meeting Brandon S. and his crew at 5:45am for some early morning A.F. canyon action on the mtb. We met up at the mouth of the canyon, and I'll admit I was a bit skeptical based on my initial impressions. Because I'm becoming a cross country mountain bike snob. The ride had everything that the snob in me abhorred - big travel bikes on big trucks, body armor, a helmet being worn backwards (inadvertently), 33 degrees at the summit (this has nothing to do with me being a snob, but worth mentioning), and yes, even the dreaded shuttle ride to the top.

To make a long story short, I ended up having the time of my life.

Brandon and I went off the front of the group so that we could retrieve the shuttle vehicle. Brandon and I went at a decent pace, but nothing crazy. The ridge trail system was in perfect condition. We got to the Mud Springs turnoff and I convinced Brandon that we should give it a shot since I'd never ridden it before. We climbed to the top and then bombed down what may be one of the best descents I've ridden. Perfect combo of fast stuff, twisty stuff, rocky stuff, rooty stuff, steep stuff rutted stuff, etc. Not as technical as Dark Hollow, but still a blast. We crossed Tibble and descended lower Mill. We drove to the top, grabbed the shuttle vehicle and drove back to the Tibble turn-off, just in time to see the rest of the group coasting in.

It was a good way to rid myself of CX snobbery. As long as people are having fun on their bikes and not bothering anyone, that should be good enough. Riding with these guys once again reminded me how much fun it is riding your bike just for fun (what a novel concept, huh?). It also convinced me to hang onto my full squish bike, which I had considered selling. I get the simplicity of 1-speed rigid bikes, but there's something really fun about bombing Mud on a full squish.

Here's a pic Brandon sent me from the ride: 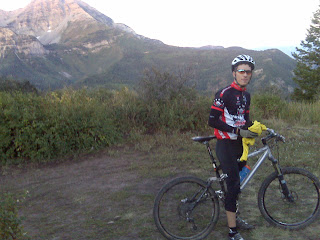 The remainder of the weekend was filled with throwing a birthday party for the youngin' and another trip up A.F. for some Timpanookee+Joy to work up an appetite for the highlight of the summer, aka, Fish's Luau. Fish never ceases to amaze with his ability to cook and entertain. I'm getting hungry just thinking about the pulled pork, not to mention the chicken, beef, and sausages (or brats? My unrefined palate can never distinguish the two). The impressive thing is that he pulled it all off despite some serious drama taking place on the home-front, but I'll leave the disclosure of the details up to him. One of the coolest things about Fish's Luaus is that they have to be one of the largest gathering of bike riders outside of a race or organized ride. I'm almost surprised that a race didn't spontaneously break out during the event. Fish has quite the impressive group of friends (notwithstanding me being counted among them), and it was a great chance to catch up with old acquaintances. Thanks again Fish!

I had not done Mud Springs until this year and like you I loved it. I need to get up there and ride some more before the snow flies