Last Saturday, I raced in a skijoring race up in Park City. From the research I've done (about 1 minute of searching on Google), there is only one skijoring race in Utah. So I guess you could say (and I will) that the winner of this skijoring race is the "Utah Skijoring State Champion." Although I'd never been pulled around by a dog before, I set my sights on the state championship.

Friday evening, Chad informed me that Racer's wife Maren was the promoter for a skijoring race in Park City on Saturday morning. Maren had some extra dogs, so Chad and Mags were going to give it a shot. I couldn't find anyone who wanted to do any backcountry touring, and I'd always wanted to be a musher, so I decided to show up as well.

Before the race got started, Park City TV wanted an interview with the two mushers at the forefront of Utah Skijoring. Since the cameraman was also acting as the anchor, I held the mic: 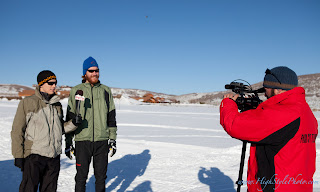 Chad in the background, dancing to YMCA: 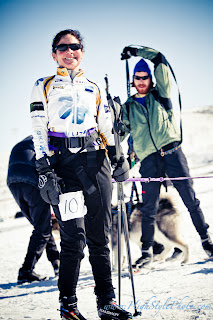 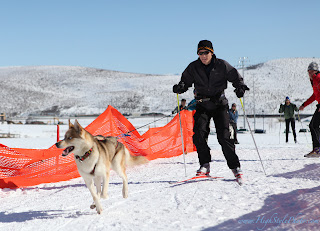 Chad started off with a whole team of dogs: 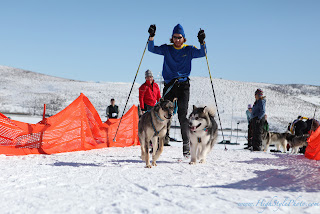 Sora bringing it home for the win. 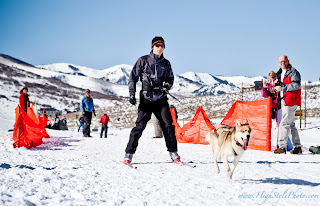 Sora and I celebrate sweet victory: 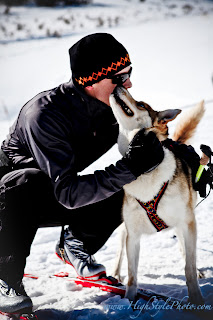 Since I am now the Utah Skijoring State Champion (according to my own definition), I feel qualified to give you some pointers on how you too can become a State Champion someday. It is actually quite simple. All you need to do is follow these easy steps:
1) Learn some basic cross country skiing skills
2) Register for next year's "IDidARace" (Utah's only Skijoring race (that I know of))
3) Call Racer beforehand and beg him to let you use his dog named Sora
4) Show up and let Sora pull you around the 2-mile race loop in about 12 minutes

That's it. If you do that, you too can be the state champion. But you'd better get started early, because I'll be asking Racer to let Sora and me defend our title.
I think I might write a book about my experience. It will be called: "It's Not About the Musher."

By the way, the pictures you've enjoyed today were taken by Julie Harman-Azares.
Posted by Aaron at 11:48 PM

Congratulations on the win! Hopefully this crappy weather will clear and we'll get another storm or two before cycling season really gets underway.

How cool is that? Just show up green and win. Skijoring sounds fun.

Like I said though, Kris, it's not about the musher. Sora was on fire.

Can I get one of those dogs to pull me around on my bike? Maybe for a hill climb or two?