After last year's perfect conditions after a June snowstorm in Deer Valley, I wasn't too concerned about this year's trail conditions. Sure enough, the conditions were good again. Perhaps a bit soft in places for a lap or so, but never too bad.
The race started and I just didn't feel great. I guess nobody does up Little Stick (which Brad has aptly renamed). I don't know if it was the cold or my preparation or what, but my legs just felt a little dead - not much spring to them. Like Rick, I was having bad thoughts on that first climb. I need to be less of a head case.
I was tentative on the first DH due to the wet conditions, but eventially found a good groove. The course will always be one of my fav's (other than doing Little Stick three times), because the two descents are just amazing.
Speaking of the DH, here is a picture from the race that I picked up from PrimeLite Photo that reminds me how much I hate racing with knee warmers (I spent most of the race wishing I didn't have them on): 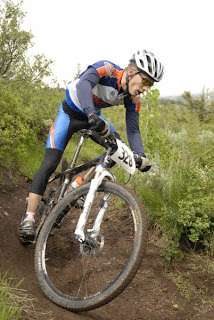 Scott from PrimeLite takes great pictures and sells them at a bargain, so check out his site to find your pictures from the past few races.
The results from DV were both good and frustrating. I think I've made an incremental improvement, but it's frustrating to look up the results and see a list of 10 people within 2-3 minutes and know that I wasn't able to catch any of them. Then there was a five minute gap between me and the next group of finishers. I'm right there with the group I want to be in, but I need to figure out how to get myself into the mix rather than on the tail end. I'm sure that sitting around and eating a ton of greasy food in the U.K. like I'm doing for the next week is exactly what I need to pull it off (more on that later). At least I'll have plent of energy stores for the Wasatch Classic!
Posted by Aaron at 3:37 PM

I need a private tour of the provo grounds. I really want to smoke the pipe. Let me know if you want to get together for a ride when you return from the UK.

You finally getting out on that mountain bike, Derek? Let me know when you're in the area and we'll head out to do some pipe smoking.