I was about to post the same thing that Mark recently posted (minus the part about his big crit win), but since he already said it all, I've deleted my previous comments and started over.  Here are a few quotes from Lance that make it tough for me to pull for him this year:
1) "The (2008) Tour was a bit of a joke this year. I’ve got nothing against Sastre or Christian Vande Velde. Christian’s a nice guy, but finishing fifth in the Tour de France? Come on." What kind of punk says something like that?  I don't care if you're now apologizing.  You're still a punk for saying something so cocky and, well, just plain mean in the first place.
2) "Here’s a confession: I expected it to be easier."  I know you won 7 tours, but seriously!?  You thought that beating all of these guys in their prime would be easy?  Your ego is even bigger than I thought.
3) "I am not ok with that theory saying there can be only one team leader."  Ha!  I'd love to hear what Lance would have said if Hincapie would have made this comment back in '99-'05 (okay, he probably would have laughed because Hincapie had no chance, but maybe if Floyd or Levi or Vande Velde would have said it).
4) "One way or the other, it's not going to go according to somebody's plans. When that moment comes, there's going to be some emotions. Some hurt feelings. It's not going to be easy." For some reason I get the impression that when lance says "somebody", he means Contador.
Despite this, I too am torn.  I can't help but get excited about Lance nearly being in yellow again. Can he really pull off the impossible?  I want him to at least keep it close just to make things interesting.  Like I mentioned in Mark's comments, if Contador drops everyone on Friday, the tour is basically over.  But if Contador does put 2 minutes into Lance on Friday, will Lance start getting bottles for him?  If Contador attacks, does Lance chase him down (or vice versa) and risk bringing the other GC contenders with him?  And if either Lance or Contador can't hang, will Levi or Kloden put in a chase?  If nothing else, Lance has made this Tour interesting.
I do have several favorites this year, and Sastre is one of them.  In addition to forgiving Lance for dissing him after last year's win, I loved what he said about the situation back when it happened:
"It’s his point of view, his words, his life. I’m not interested in anything about that. I think he’s a great champion, he won seven Tours, the world championship, he’s a great rider. But behind every rider must be a person, and in that respect, maybe he needs to learn something more."
(SPOILER ALERT FOR TODAY'S STAGE)
You also gotta love the joy on Voeckler's face: 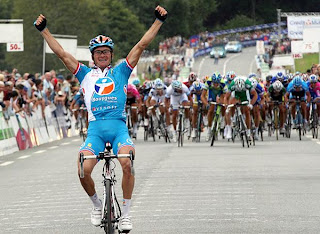 Back in his yellow jersey days, I have to admit that I sort of wished that Voeckler would just go away, but today I have a new found respect for this dude.  He certainly made today's stage worth watching.
Posted by Aaron at 4:00 PM

for the love of god i despise Lance and his ego, and those who defend him and worship him like he is Michael Jackson or something, wait a minute????????

That's too funny - I though about making that analogy, but decided it was going too far. Thanks for going too far, Bob.

Is Voeckler that happy to have won the stage, or is that just the way his chamois is bunched up?

I like Voeckler, if nothing else, because I can identify with him.

No matter, when the mountains hit Armstrong will fade just like in the Giro.

Lance is used to being the Boss. He still talks like the Boss, but can he still ride like it? I guess we will find out.

Dating one of the Full House twins and running around shirtless with Mathew Mconwhatever pushed Lance over the edge for me...that was his jumping the shark moment.

But I think he is going to try and maybe succeed at ripping the legs off of the peleton when the mountains hit.