I've read a bunch of race reports on the PCP2P and they all have a pretty similar storyline:

Fun time racing in a paceline around Round Valley
The rain and beautiful rainbow on Prospector
Feeling good through the first aid stations
Monumental bonk, usually somewhere near Shadow Lake
Recovery on Mid Mountain
One of the best and most difficult races around

That pretty much sums up my race as well. I went into the race hoping to finish in less than 9 hours, but honestly wouldn't have been surprised if it had been anywhere between 8 and 11. Being the first year, finishing times were an unknown, but there were a lot of people predicting Leadville-like finishing times.

The entire course was fantastic, and included just about every variety of singletrack you could imagine, from rolling desert, to smooth and fast, to power climbs, to technical climbs, to highly technical, twisty, rooty, rocky descents. It really had everything. Except for roads. Over the course of 76.88 miles (according to the Garmin), I would be surprised if there were more than 3 total miles of road (both dirt and pavement). Everything was amazing, buff singletrack.

Hardly anything came easy at the PCP2P. There were no extended flat sections where you could put your head down and hammer. Whether you were climbing or descending, it was balls-to-the-wall the entire time. The descent down TG2 and Johns trail were literally as hard as any of the climbing. But I'm glad that everyone one of those trails were included, as they all added to the remarkable race. 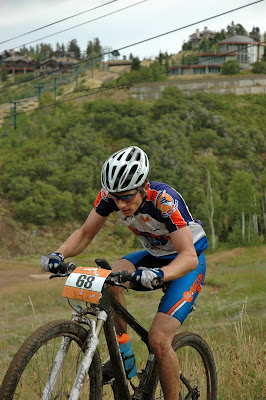 In general, I think that my race went as good, if not better, than I could have expected. I forced myself to alternate between gels and blocks every 45 minutes, even though my stomach never felt hungry. I think this paid off in the end, because the last 15 miles went incredibly well. I drank 8 bottles of 3 different CarboRocket flavors, and they all tasted delicious and were easy on the stomach. I did have a meltdown from miles 45-60, where I just crawled around Shadow Lake and up Spiro, but I think that was due more to my lack of long rides rather than anything I did during the race.

The descents in this race were just amazing, and I felt like I just flew down them, including the ripping fast Keystone descent (riding it 13 times in last year's Perfect 10 helped), a 2500 foot riot from Shadow lake to PCMR, and the two descents into the Canyons. The Superfly beat me up a little, but it ran flawlessly (thanks Racer), and I think was a perfect bike for this race.

In the end, I rolled across the line in 8:43, which put me at 31st overall (including some duo teams) and 6th in my class. Full results here.

Lyna saw my dirty face at the finish line and couldn't help but snap a pic: 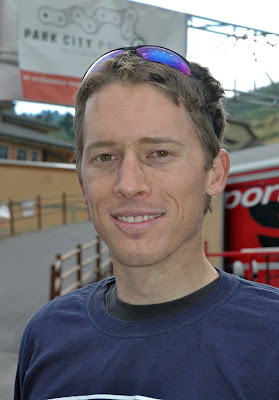 If any of you Leadvillites are wondering how the PCP2P compares, I found the comprisons to be pretty interesting. Most people that did both races finished the PCP2P a bit faster than Leadville. For instance, Alex Grant (the winner of the PCP2P) finished the P2P about 5 minutes faster his Leadville finish, yet thought that the P2P was more difficult due to the technical terrain, but others thought the opposite due to Leadville's higher elevation. Either way, they are both obviously very challenging races.

Finally, a huge thanks to the race organizers and volunteers. Being the first year, there was a lot of apprehension about the organization, but everything went perfectly. Adam, Jesse and I had coolers at each of the aid stations, but we could have easily gotten by with the neutral support. Volunteers seemed to be at nearly every major turn in the race, and the organizers must have emptied 20 cans of spray paint marking the course.

Good work, man. It seems like that kind of course suits you.

Strong work. PCPP is on my list for next year. I spent all day Saturday wishing I had been racing.

Man what a day. Is it weird that I want to do it all over again right now?

Nice finish, and good pic of the dirty face. When do you want to get back out on the bike again? Maybe an early morning AF ride.

Ahh, I'm sorry I missed it. I rode Lotoja instead and now regret it after your description of the race. I missed battling with you in a mtb race this year. Next year maybe?