Last weekend I headed down to San Jorge for the 31st annual Camp Nails. As was expected, we got off to a late start and didn't arrive till Saturday morning at 1am. We made camp and slept with images of red dirt dancing in our heads. And I found out that the 20 degree rating on my new sleeping bag is total bullcrap.
Here is team Nails (Kevin, Nails, Dan, Craig, and me): 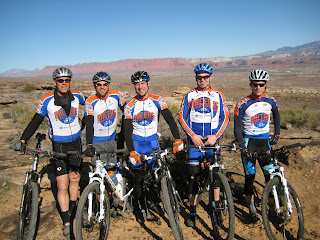 Here is Dan learning to ride a mountain bike on Zen - not bad for a roadie. This is steeper than it looks: 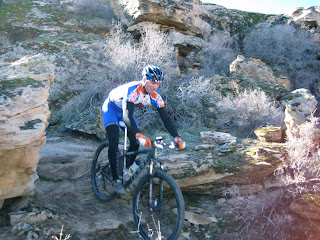 Here is Craig on the way up. This is not as steep as it looks: 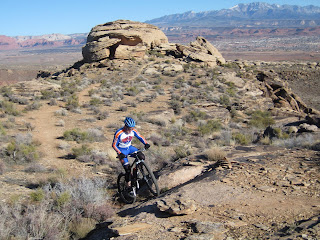 and Nails on the same little move: 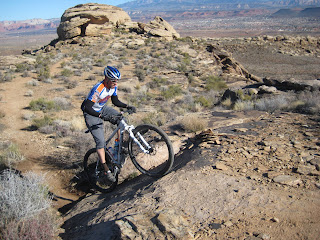 And Dan felt the need to show up Craig and Nails (he's pretty upset that it wasn't called "Camp Dan"), so he decided to ride the move with one leg: 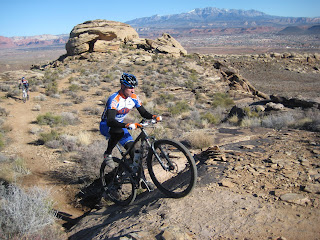 After this, I put them all in their place by sitting on my handlebars and riding it backwards with one leg and no hands. Unfortunately the picture didn't turn out very well.

We were joined by Sabrosa Jon and his buddy Rob for some riding on the race course and in the Barrel Roll area. Two broken spokes later, we came back for some additional race course and Zen goodness, until the sole survivors of Camp Nails were Dan, Nails, and me. I just about went into acute renal failure on the ride back to Jon's place. Those dudes are putting in a serious off-season, and are going to put the hurt on some poor duo team down in Old Pueblo in a couple of weeks, just like they did down in Temecula a couple of weeks ago, and just like they did to me at Camp Nails.

The most important development during Camp Nails was the naming of my granny gear. From now on, instead of dropping down to my "granny gear", I'll be dropping down to "LaBerta." My granny gear and my grandma LaBerta actually have a lot in common. Small, cute, ability to take a lickin' and keep on tickin', and not very many teeth. Plus, "LaBerta" is a lot more fun to say than my other grandmas named "Mary" and "Helen" (although they both are/were great grandmas as well). And yes, I've had three grandmas. And no, I don't come from a polygamous family.

Hey can you recomend a good bike shop? maybe one that has i dont know.... like bike jerseys for sale? I cant seem to find one any where

Thanks for coming S.T. Camp nails was so much better than camp lynduh. I hear floyd is coming next year. Maybe we could get carls to sponsor us with $6 burgers

hey, camp nails is pretty sweet now and these things cost money. now that its so popular we are tapping in.

Hey Nails, if I preregister, can I get last year's price?