Headed down for the RAWROD weekend with Mark a day early. The initial plan was to do some backcountry in the La Sals on Friday and ride the White Rim on Saturday. The plan was epic, but the weather did not want to cooperate. The warm weather not only prevented a corn cycle, but pretty much melted all of the snow below 8500 feet or so. So instead, we had to settle on riding Slickrock and Sovereign on Friday instead. I know, sucks to be us.

It had been almost 10 years since I had ridden Slickrock, so I was excited. We hooked up with Brandon before hitting it. Here he is on the "cogs to spare" climb. They (whoever "they" are) may need to rename it now that he easily cleaned it on his singlespeed: 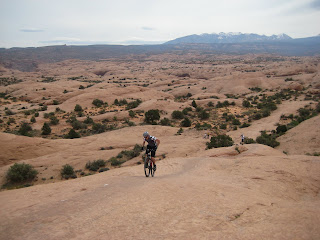 Mark getting it done: 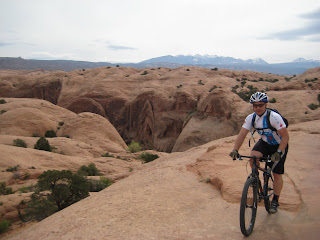 Brandon doesn't let the steep stuff slow him down: 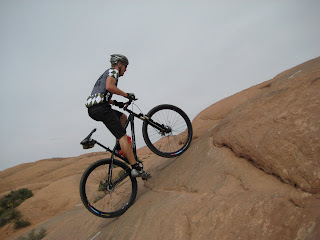 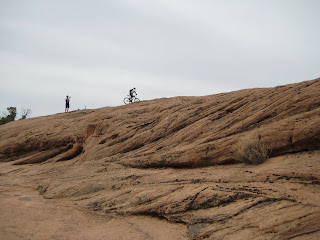 And Brandon on the move of the day: 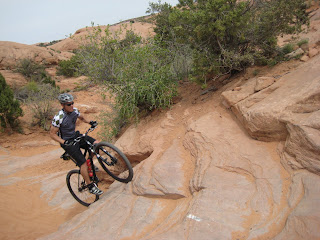 Didn't get many pics of Sovereign, but it's been expanded quite a bit since I rode it last (3 years or so). We met up with Keith beforehand, which was nice because he has a GPS embedded into his brain which helped us naviguess the route. One guy we met on the trail made the mistake of asking him for directions. After a 5 minute detailed explanation of every spur in the area that I'm pretty sure included GPS coordinates, I'm think I saw the guy's brain explode inside of his skull. Surprisingly, he didn't ask any followup questions.

Here is Mark in the only pic of Sovereign: 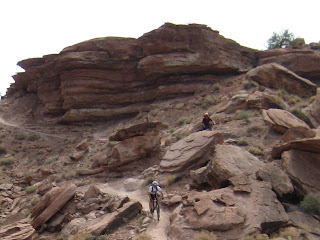 A bit later, Mark chose the wrong line on a steep move, fell to his right, and landed his patootie squarely on the sharp edge of a sandstone slab. The most unfortunate part of the crash is that he was in way too much pain at the time for me to use any of the dozens of jokes that should have been made anytime someone's ass takes the brunt of a crash. His weeping, wailing, and gnashing of teeth was so great that I thought he was done for the weekend. To his credit he not only road the rest of Sovereign, but the 101 miles of RAWROD the next day.

The wtf moment of the day came later that evening back at the campground when this guy pulls up to the top of Horsethief pulling a Porsche: 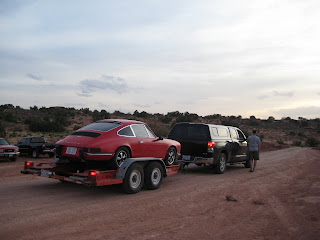 I never got the story on this guy, but Chad and I had a good laugh at his expense. Oh how I wish he would have asked me for directions. I would have told him that if he kept going straight (right down Horsethief), he would have found the Moab Porsche convention he was looking for.

Edit: a few more pics from Brandon:
Brandon double-dog-dared me to try this steep section. I paid for it the next day on RAWROD: 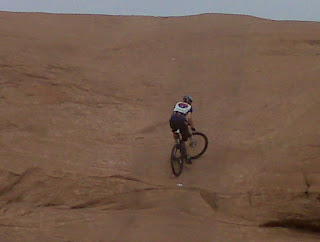 I think this is more slickrock: 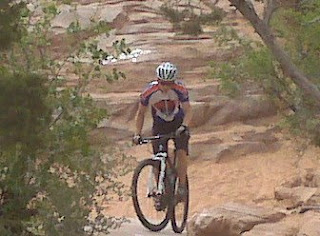 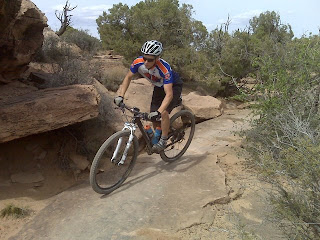 Yes I was wondering about the Porsche as well. Why would you want to pull it all the way down that dirt road. Friday was too much fun. Next year hopefully my legs will be in better shape so we can have another pre-rawrod friday ride. And you know the double dog dare would have been a race up that climb had I brought my geared bike.

The story with the Porsche is actually an easy one. I owned it. I wanted a nice motorcycle, so I sold it to Mike Young's father in law. Mike happened to be coming to RAWROD and so did I. I met him there and transfered it to him. I did get some funny looks tho.

Thanks for the comment, Chad. I figured there must be an explanation. It was just funny seeing a Porsche in the middle of nowhere like that. I hope no offense was taken.